Each year, approximately 300,000 cases of Lyme disease are reported to the Centers for Disease Control and Prevention (CDC) by state health departments in the United States. However, this number does not reflect every case of Lyme disease that is diagnosed in the United States each year. In fact, the geographic distribution of high incidence areas with Lyme disease appears to be expanding according to data reported to the National Notifiable Disease Surveillance System (NNDSS) with cases increasing from 324 per 100,000 of the population in 2008 to 454 per 100,000 in 2017.

With the rise in awareness of Lyme disease, as well as the rise in case numbers, comes a justifiable concern regarding how exactly this disease is contracted and how it can be passed on. Let’s separate fact from fiction and answer the question: Is Lyme disease contagious?

See also: The Signs and Symptoms of Lyme Disease

Can Lyme disease be passed from person to person? 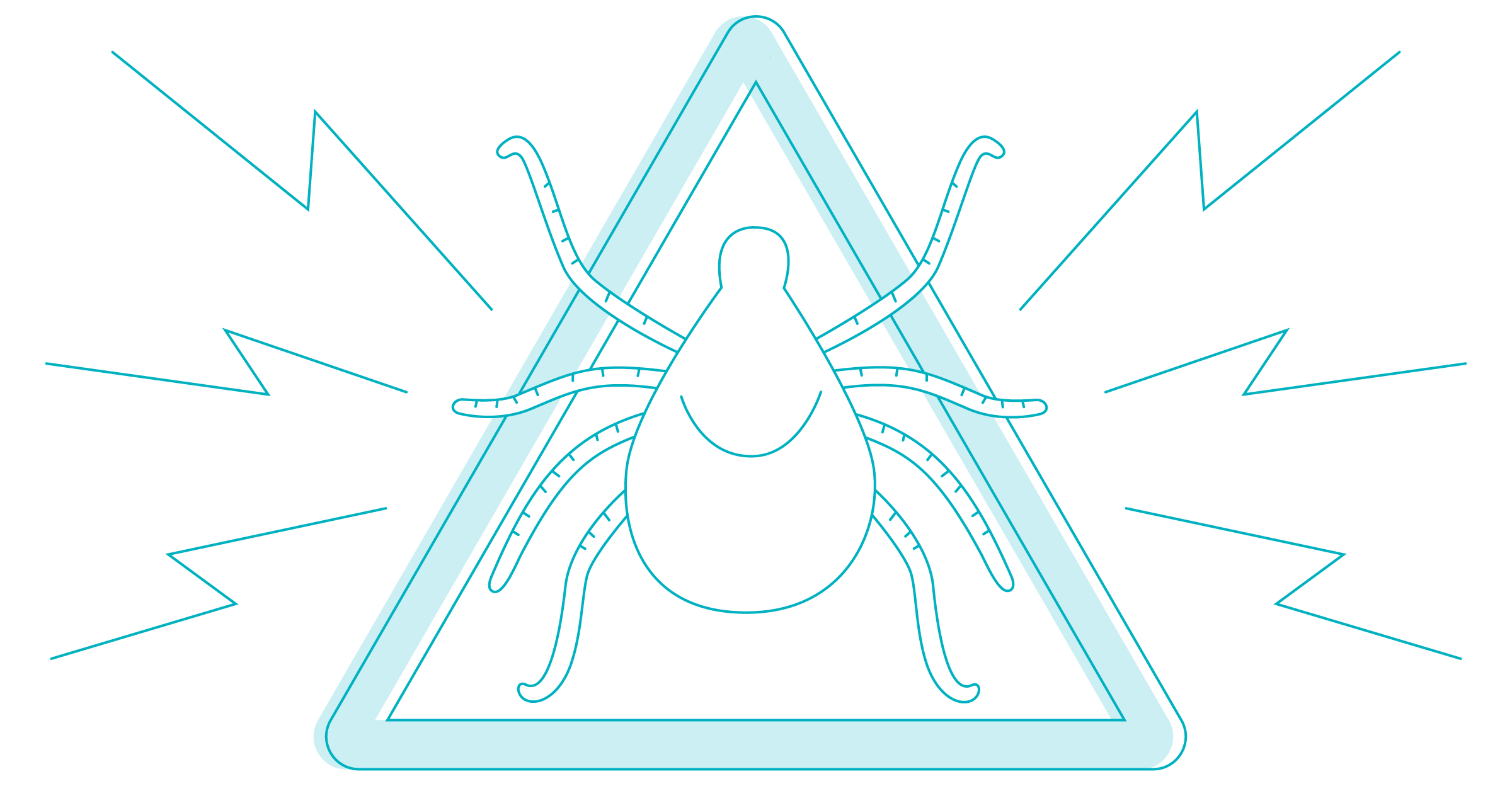 According to experts, there is no evidence that Lyme disease can be transmitted from person to person. This means that a person can not pass on Lyme disease through kissing or having any close physical contact with another person. It also can not be contracted through:

And while there are some studies that claim that the bacteria borrelia can be sexually transmitted, following studies that tested vaginal and seminal fluids and found reactive samples of the bacteria. It is important to remember that there are limited scientific proof and sample sizes being used within these reports.

It’s important to note that while Lyme disease is most commonly found in woodland animals, it can also infect domestic pets, including cats and dogs. In saying that, there is no evidence that Lyme disease is contagious cross-species however.

How can Lyme disease be passed from person to person?

Remember, Lyme disease is transmitted through the bite of an infected deer tick and it can not be transmitted to humans through person-to-person contact. However, untreated Lyme disease during pregnancy may lead to infection of the placenta which can cause complications. Fortunately, the possibility of passing the disease on to the fetus is rare, and proper antibiotic treatment can reduce any potential risks.

How can you contract Lyme disease?

While we know there are no indications that Lyme disease is contagious, it’s important to know how Lyme disease can actually be passed on and in what circumstances you may contract the disease.

Lyme disease is also known as Lyme borreliosis and is an infectious disease caused by Borrelia bacteria, spread by ticks. Ticks are small, spider-shaped creatures that feed on the blood of mammals, including humans. The ticks that cause Lyme disease are commonly found in woodland and heavily forested areas. These types of habitats have a high number of tick-carrying animals, such as deer, mice, and sheep. Due to breeding patterns, the tick population is at its highest in late spring and early summer and can be found in rural areas.

Lyme disease is spread through the bite of infected ticks, most commonly black-legged ticks (also known as deer ticks and Ixodes scapularis). Ticks can attach to any part of the human body but are often found in hard-to-see areas such as the armpits, scalp, and groin. In most cases, the tick must be attached for 36 to 48 hours or more before the Lyme disease bacterium can be transmitted.

The Lyme disease bacterium Borrelia burgdorferi may live on large and small woodland animals including deer, mice, and squirrels through the bite of a black-legged tick. Often ticks will latch onto a woodland animal to feed on their blood, through doing so, they pass the bacteria into the bloodstream of the animal. The ticks also have the ability to latch onto human skin and in the exact same fashion, they pass the Borrelia burgdorferi into a human, infecting their bloodstream.

To contract Lyme disease, you must be bitten by an infected tick, this tick must be attached to the skin for 36-48 hours, offering ample time for the bacteria to enter the bloodstream. This is how Lyme disease tests often pick up on the antibodies that are produced in the body in retaliation to the bacteria.

See also: How Do You Prevent Lyme Disease?

What are the signs of Lyme disease?

70-80% of individuals who become infected with Lyme disease will experience an expanding rash that is clear in the middle with spreading redness on the outer circles. This rash is also known as erythema migrans and starts to develop between 21-30 days after being bitten by a black-legged tick.

You should contact a healthcare provider immediately if you are experiencing the following symptoms:

Common flu-like symptoms such as a headache, fever, chills, and fatigue are often associated with early-stage Lyme disease.

Bell's palsy, meningitis, and impaired muscle movement may occur due to the infection of brain tissue in the later stages of Lyme disease.

Other symptoms of Lyme disease include:

When did you receive your diagnosis for Lyme disease?

Even though the diagnosis is definitive, the symptoms began long before my diagnosis. I was bitten in July 2006 which is 12 years ago, basically I have been sick since then.

In the run up to my diagnosis I seemed to always be run down with minor infections. I always had swollen glands, and I was genuinely in the doctor's office every two weeks taking antibiotics. The doctor’s general attitude towards my recurrent illnesses was “You have a weak immune system, you just seem to pick these things up.”

In 2011, I was diagnosed with fibromyalgia by my doctor. (Fibromyalgia is a condition that is commonly characterized by pain, fatigue and stiffness.) Fibromyalgia is actually a symptom of Lyme disease.

What was the first thing that went through your head when you received your diagnosis?

I know it sounds strange but I was completely relieved. I was so sick for such a long time.

I am a proactive person, not just with my health but with everything. I did every single thing that I was recommended to do. At the time I had no control over how my body felt so I did everything I needed to do to make it better.

I lived, knowing that there was something more sinister happening, it just made made no sense to me that I was experiencing this much pain without a solid explanation.

I respect medical professionals but your gut knows. You just know that there’s something more. I got no feedback from my body when I was trying out different methods to feel better, so when I received my diagnosis of Lyme disease, I wasn’t scared.

How did you contract Lyme disease?

I was camping and we were aware that there were ticks in the area. There was no sense of urgency at the time because there was so little research out there regarding the dangerous side effects of Lyme disease. When I got sick, my dad did a lot of research and said you need to take a test.

There is a lot more research today that says Lyme disease tests are not as accurate if taken retrospectively because your body may not have a high volume of antibodies in the blood. Today I know I received a false negative. I definitely didn’t think it was anything even though I got the bullseye rash, which is common sign of the condition. When I got the rash, I thought to myself that I should go to the doctor but then it went away and I forgot about it.

There are a few misconceptions around Lyme disease. Do you think there is a stigma surrounding the condition?

There is a massive black bubble surrounding Lyme disease. It’s a very very complex disease and there is a fear because of the lack of understanding related to the illness.

It was said to me on numerous occasions that my condition was psychosomatic. I have nothing to hide psychologically. I saw a highly accredited psychiatrist and he actually said I was doing so well for my age and the variables that were affecting my life at the time. I was already sure I wasn’t going crazy, but that is what I was lead to believe because Lyme disease and fibromyalgia is not well understood.

How has your life changed with Lyme disease?

I’m lying down in bed as I am speaking to you right now. I spend most of every single day lying down. I know that there is a misconception that people who have a chronic illness enjoy getting to rest but you need to ask yourself, who would want that life?

My main symptoms include:

It completely affects my whole life. I can’t work and normal day to day tasks are very tough. Everything is like climbing a mountain for me.

I rely on crutches to walk. There’s no way to quantify how it affects my day to day life. Sometimes I lie there and my pain is reaching level 10 and I have to lie there and just take it and tell myself that it's normal.

A good day wouldn’t be a good day based on anyone else’s standards. I can’t watch things properly and I find it difficult to read with my level of possible concentration.

What advice would you give to someone who has just received their diagnosis?

Trust your gut. You know you can do it, there are ways to cope with your condition.

Taking it one day at a time is the best way to deal with it. It’s very difficult to get through the day. You need to get through what’s in front of you right now.

My journey is not the experience of everyone and I know that I have been unlucky in many instances and with my personal journey but I've seen people get so much of their life back through treatment.

What does your health mean to you today?

Personally, I think there is nothing more important than your health. You can have things but without your health, none of it matters.

The name of our interviewee has been changed to Rachel to ensure confidentiality.

You should get tested for Lyme disease if you have been bitten by a tick. You should especially take a Lyme disease test if the tick went undetected for over 24 hours, as there is a greater likelihood of contracting Lyme disease in these instances. If you notice Erythema migrans, ensure that you seek out testing immediately. Always bear the early symptoms in mind following significant periods spent in grassy or woodland areas.

LetsGetChecked provide an at-home Lyme Disease Test which tests the blood for antibodies that are associated with Lyme disease.

You should consider taking this test if:

If your symptoms are severe, go straight to your doctor.

See also: How do you Check for Lyme Disease From Home?