The Importance of Bowel Cancer Screening

The face of BBC News at Six, George Alagiah reveals his bowel cancer has returned. Alagiah believes being screened at 50 would have increased his chances of surviving bowel cancer. 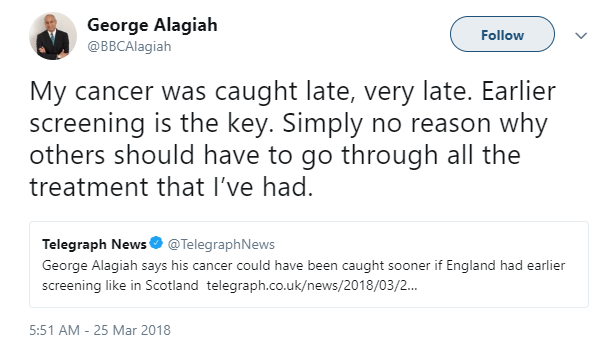 The London-based news presenter, who is currently 62 years old, discovered that his now stage four bowel cancer has returned.

In 2014, Alagiah had been diagnosed with the bowel cancer after noticing blood in his stool. The disease later spread to his liver and lymph nodes, which led to intense treatment of chemotherapy and multiple operations, including having his liver removed.

The Importance of Bowel Cancer Screenings

The age of screening for bowel cancer in England starts at 60, while Scotland offers screening every two years for people over 50.

You are 20 times more likely to survive bowel cancer if detected early. According to Cancer Research UK, there is only 10% chance of surviving five years or more when diagnosed with stage four bowel cancer. However, when bowel cancer is diagnosed at stage one, chances of survival are at nearly 100%.