Green Vaginal Discharge: What is it and What Causes the Symptoms

What is green vaginal discharge?

Green vaginal discharge is an abnormal green-coloured secretion which is often caused by the body's inflammatory response to an infection. When pathogens enter the genital tract, they reproduce causing the normal clear or whitish vaginal fluid to become heavy and take on a yellow, yellow-green or green color.

Green discharge is often accompanied by a foul-smelling odour and other symptoms such as vaginal irritation, a burning sensation during urination and pain during sex. More often than not, infections associated with green discharge are not serious, and are often easily curable with antibiotics if caught early.

Some common causes of green discharge:

At the onset of an infection, it is typical for your discharge to take on a frothy texture, and as the infection progresses it may increasingly take on the appearance of a yellow looking mucus, then light green before becoming thick green in color.

Remember, some form of discharge is normal. As a sexual health specialist, I get asked about abnormal discharge and vaginal discharge on a daily basis. I understand that it can be a cause of great concern, and for many people, it leads them to the conclusion that they have a sexually transmitted disease, or that they may have a very serious health condition.

What is causing green discharge?

The most common cause of green discharge is trichomoniasis, a sexually transmitted disease (STD) that is caused by a parasite called trichomonas vaginalis.

Trichomoniasis, while it commonly causes green discharge, often also causes a host of other physical symptoms.

Trichomoniasis is one of the most common STDs in the U.S., affecting almost3.7 million people per year.

It is almost exclusively sexually transmitted, contracted through vaginal-to-vaginal or vaginal-to-penile contact.

70% of people infected with trichomoniasis will not display any signs or symptoms.

For those people that do experience symptoms they will usually notice yellowish-green foul fishy smelling discharge within 5 to 28 days of contracting trichomoniasis. However, for some people, symptoms can develop later.

LetsGetChecked’s STD test data shows that green vaginal discharge is the most common symptom reported by patients who have tested positive for trichomoniasis, with 75% of people reporting abnormal vaginal discharge 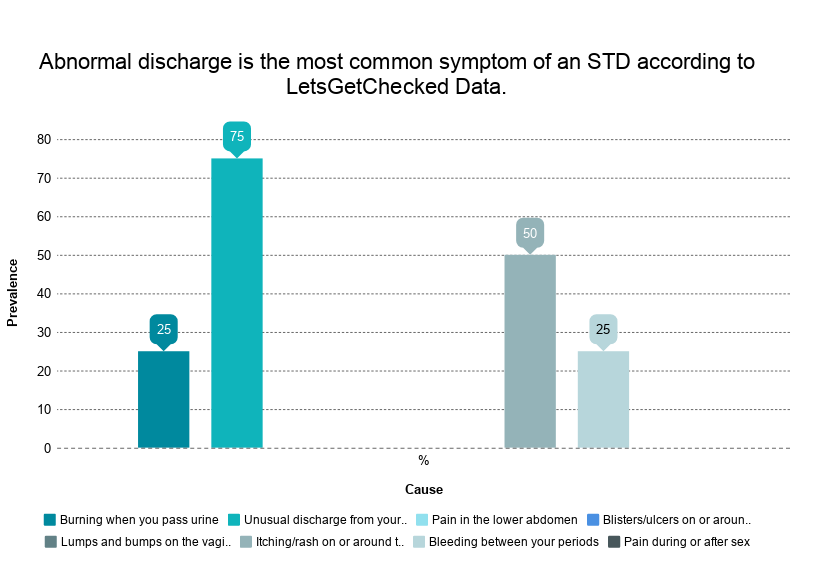 Other symptoms you are likely to notice are itching or rashes around the vagina (50%), pain or discomfort whilst urinating (25%), or bleeding between periods (25%). Pelvic pain may also occur but is not as common.

I recommend that if you notice green discharge you should speak to your doctor or visit a sexual health clinic immediately so you can get tested.

The good news is that if you do have trichomoniasis it is normally easily treated. Your doctor will typically prescribe you a antibiotic, such as metronidazole or tinidazole, which will clear up the infection within a couple weeks.

Green discharge may be a sign of other sexually transmitted diseases such as gonorrhea or chlamydia.

It is quite common for women with trichomoniasis to have a concurrent gonorrhea or chlamydia infection.

As with trichomoniasis most people with chlamydia or gonorrhea don’t display any symptoms. However, those that do often experience painful or burning sensation when urinating, increased vaginal discharge (white, yellow, or green discharge), pain during sex or vaginal bleeding between periods.

If left untreated, gonorrhea or chlamydia can lead to serious health problems such as pelvic inflammatory disease (PID). PID often has no symptoms, but some women do experience abdominal or pelvic pain. If left untreated PID can cause permanent damage to your reproductive system leading to an inability to get pregnant, and potentially ectopic pregnancy (pregnancy outside the uterus).

If you are concerned that you might have trichomoniasis, gonorrhea, chlamydia or any other type of STD then you should consider using an at home STD test that will test for the common types of STDs.

As many STDs do not have symptoms, early detection and treatment is vital to avoid long term consequences. If you test positive, you will be able to start treatment immediately and avoid passing an infection to a partner or risking other health side effects.

Bacterial vaginosis (BV) is another possible cause of green vaginal discharge.

Unlike trichomoniasis, BV is not a sexually transmitted infection. Instead BV is caused by an imbalance of the “good” and “harmful” bacteria that are normally found in a woman’s vagina.

Researchers aren’t 100% sure what causes BV, but they suspect that this bacterial imbalance can be caused by having a new or multiple sex partners, or through excessive douching. BV is most common in those who are sexually active.

Despite bacterial vaginosis being the most common vaginal infection in women aged 15-44, many women with BV don’t know they have it because their BV doesn’t display any symptoms.

Of those women who do display symptoms, their symptoms are often mild consisting primarily of a thin white or grey vaginal discharge (sometimes green tint) that has a strong fish-like odor, that is particularly noticeable after sex. Other symptoms include itching or rashes around the vagina, and pain or discomfort whilst urinating.

Having BV can increase your risks of contracting STDs such as H.I.V, genital herpes, chlamydia, pelvic inflammatory disease, and gonorrhea, and can also lead to pregnancy problems including premature births or a low-birth-weight baby.

If you suspect that you might have bacterial vaginosis, I recommend that you speak to your doctor as soon as possible.

Your doctor will examine your vagina for signs of vaginal discharge and bacterial vaginosis, and may have a swab of discharge tested to confirm the BV diagnosis. If it comes back positive, you will be prescribed an antibiotic treatment that will clear up the infection within a couple weeks.

I’m pregnant and have green discharge, what should I do? 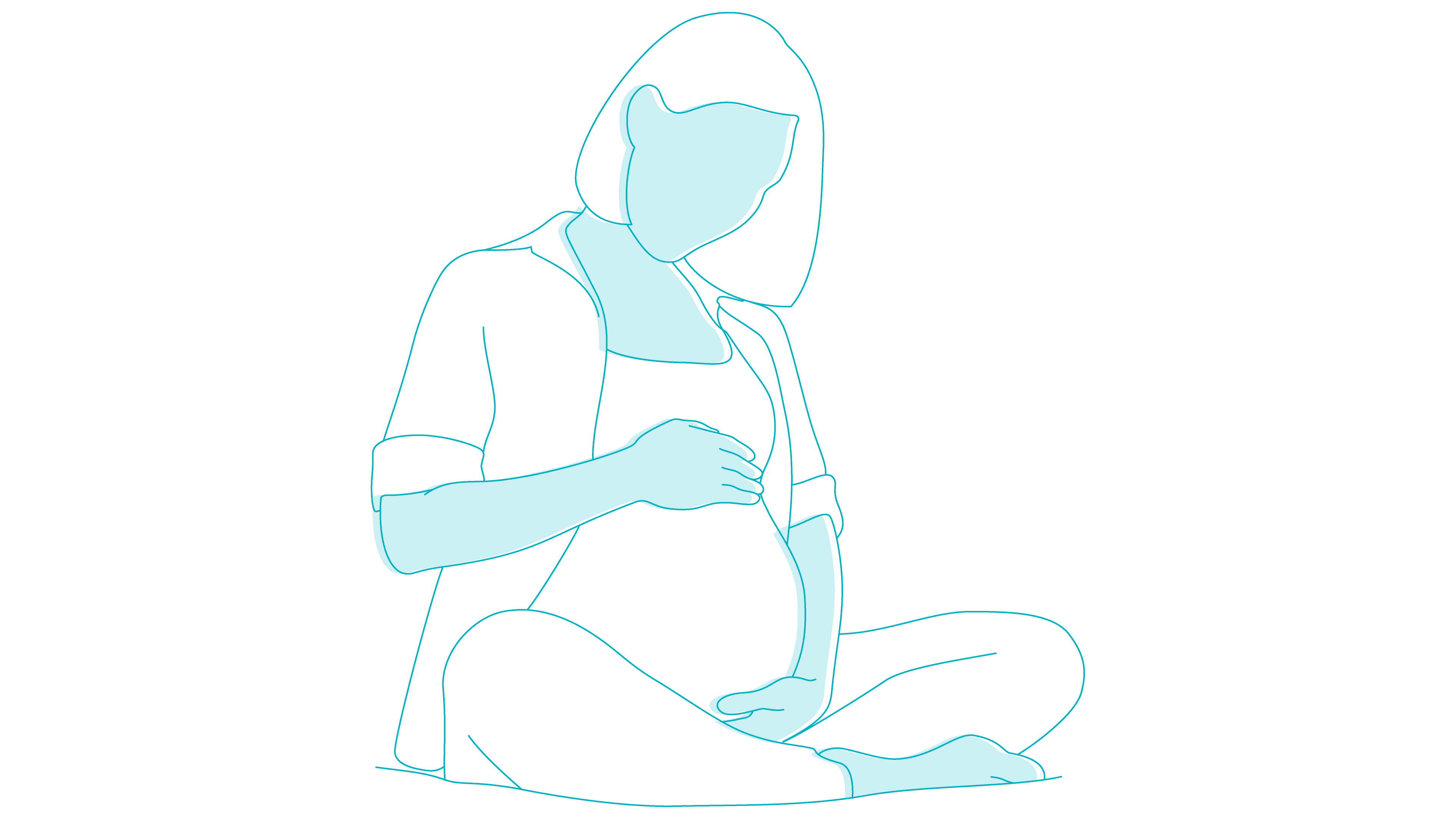 The answer is no. If you notice green discharge whilst pregnant you should never try and self-diagnose, always talk to your doctor as they will know your medical history and be able to offer more helpful insight.

Green discharge during pregnancy might indicate any of the possible causes we’ve already discussed: trichomoniasis, gonorrhea, chlamydia, or bacterial vaginosis (BV). All of which can complicate your pregnancy and hurt your unborn child.

However, during pregnancy there are two other possible causes of green discharge, urinary tract infections (UTI) and on occasion amniotic fluid, which will discuss below:

When women are pregnant, they are more susceptible to urinary tract infections. As the uterus grows larger, it presses on the ureters (the duct by which urine passes from the kidney to the bladder) causing urine to gather in the bladder. This can cause a urinary tract or bladder infection.

Green discharge, along with an unpleasant odor and/or a burning sensation when urinating are common symptoms of urinary tract infections.

If you notice any of these symptoms then talk to your doctor. They will be able to treat the underlying infection and it should have no effect on your pregnancy.

What should I do if I notice green discharge?

As you will have gathered by now, if you notice green vaginal discharge at anytime you should always contact your doctor straight away. Green discharge isn’t normal, and is often a sign of an infection. If detected early your doctor should be able to test your urine promptly and treat it very easily with antibiotics. The risk of leaving an infection to fester isn’t worth it.

You shouldn’t be apprehensive about going to your doctor with any questions about vaginal discharge.

Most women will have a vaginal infection (with discharge, itching, or odor) in their lifetime. So don’t worry about it being awkward to bring up, your doctors will be very used to talking about it.

We prefer our patients to come to us straight away if they are concerned about abnormal discharge, because the underlying causes are often very easy to treat if diagnosed early. The issues arise if the patient has delayed coming to talk to us.

Questions Your Doctor Will Ask

As we discussed, just because you may not be displaying the symptoms of a STD doesn’t mean that you haven’t contracted one. If you are in any way concerned that you might have a STD you should always visit your local STD clinic or take an at home STD test.

Abnormal discharge can happen as a result of an STI but that’s not always the case. Other infections such as Vaginitis, which is an inflammation or infection in the vaginal area, may also be the cause. If you suspect that you are experiencing vaginal discharge as a result of either, you can get checked with your doctor or test from home with LetsGetChecked’s range of at-home STI tests or Vaginitis Test.

LetsGetChecked’s tests arrive in discreet packaging with a return envelope and clear instructions inside. Online results will be available within 2-5 days and our dedicated clinical team will be available to answer any questions you may have throughout the process. Should you test positive, we can provide treatment in line with clinical guidelines. We will send this treatment to your home at no additional charge, so there is no need to visit the drugstore.

You should consider taking a test if: