Where Are The Highest Rate Of STIs In The UK?

One person is diagnosed with a sexually transmitted disease every 4 minutes in the U.K.

London is responsible for 25% of all new recorded STIs according to the FPA (Family Planning Association) and it is reported that the incidence of sexually transmitted infections is set to increase globally in 2019.

Most people in the United Kingdom underestimate their risk when it comes to their sexual health, and what’s more, those who see themselves to be at significant risk for contracting a sexually transmitted infection have not recently accessed sexual health screening according to a recent study.

In this article, we are going to tell you where the highest rates of STIs are in the U.K. and why alongside Dr. Dominic Rowley, who is a Sexual Health Specialist and Medical Director for LetsGetChecked.

Where Are The Highest Rate Of STIs In The U.K?

London has the highest rate of STIs in the United Kingdom according to Public Health England who report that there were over 422,147 new diagnoses of sexually transmitted infections in 2017.

16 of the top 20 local authorities in England being reported in the capital of London. 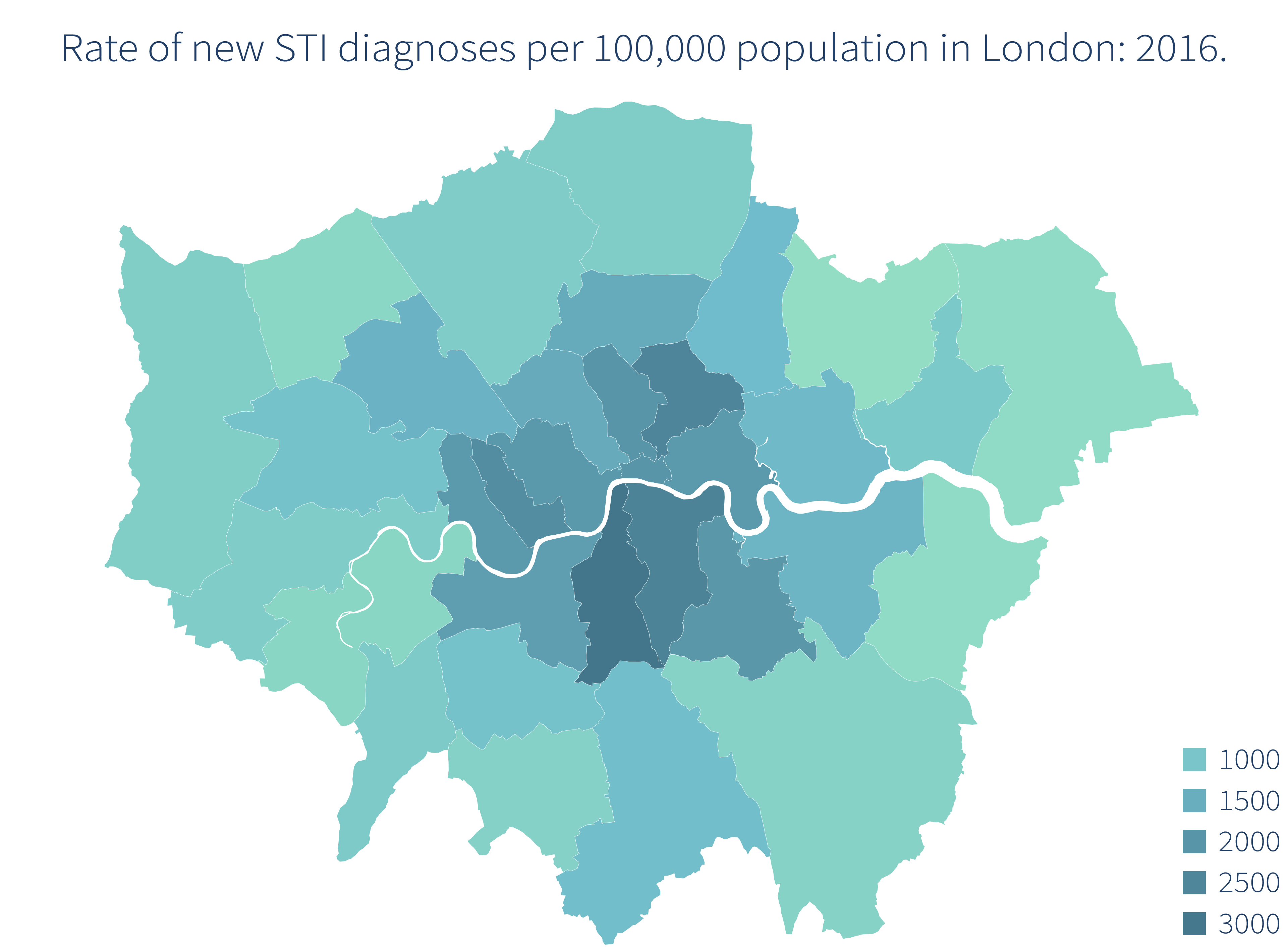 Today it is reported that the most common locations where you can pick up an STI in London include:

It has been found in a recent studypublished in The Lancet, that men and women in the United Kingdom underestimate their risk of contracting a sexually transmitted disease.

The chance of contracting an STI in London is considerably higher than any other UK city with a rate of infections 65% higher than the national average.

What Is The Most Common STI In The U.K?

Chlamydia is the most common STI in the U.K, accounting for almost half of all new STI diagnoses each year.

Some of the other most common STIs in the U.K. include:

Young people aged between 15 to 24-year-olds are the most high risk demographic according to the Centers for Disease Control and Prevention. In the U.K study, 15-24 year olds accounted for 62% of those diagnosed with chlamydia, 52% with gonorrhoea, 51% with genital warts, and 41% with genital herpes in 2015.

Emerging cases of gonorrhea are especially worrying due to the fact that super gonorrhea is a strain that shows antibiotic resistance to three of the most common medications used to treat bacterial infections, including ciprofloxacin, cefixime and azithromycin.

What Age Group Has The Most STIs?

The age group that has the most STDs, or the most common age to be diagnosed with an STI is between the ages of 15-24.

The most recent U.K report says that 144,000 diagnoses of sexually transmitted diseases were made in people aged between 15-24 in 2017.

Dr. Dominic Rowley says: "This is the most socially active group. This group are more likely to use recreational drugs and drink alcohol on a regular basis. Social media and hook up apps play a role in this too."

Other contributing factors to the 15-24 age group being at a higher risk include may include the sex education they receive in schools, greater sexual freedom in the younger generations and their location.

For the younger generations, the priority is often avoiding unplanned pregnancies, however, these concentrated efforts may distract people from the very real risk of contracting a sexually transmitted infection.

Dr. Rowley says "Fertility isn't an issue for that age group, getting pregnant is the biggest fear but there's much more to a healthy sex life than the fear of pregnancy."

While the 15-24 age group is currently at the highest risk of contracting a sexually transmitted infection, there are steps that everyone can take to protect themselves, and reading this article is a good place to start.

In the next section, we are going to talk you through who is at risk of contracting an STI, as well as a guide to bettering your relationship with your sexual health.

Who Is At Risk Of Contracting An STI?

If you are having unprotected sex, you are at risk of contracting an STI.

The impact of sexually transmitted infections remains greatest in young people and in men who have sex with men (MSM).

Men who have gay or bisexual relationships are advised to undergo H.I.V. and S.T.I. tests at least once a year, or every three months if having unprotected sex with new or casual partners.

Young people aged between 15 to 24-year-olds are the most high risk demographic according to the Centers for Disease Control and Prevention.

In this study, it was found that MSM represented 90% syphilis infections and 70% of gonorrhea infections. HIV is also a growing concern in the capital with 1 in 12 MSM in London living with the virus.

512 people were diagnosed with HIV in England in 2015. 47% of these were in London. The symptoms of H.I.V are often subtle making the prevalence of HIV a growing concern in the U.K and further afield.

While the numbers might seem like a lot to take in, it’s important to say that everyone and anyone is at risk of contracting an STI at some point in their lifetime.

"A lot of men might have a bad experience with a condom the first time and then decide they don't like them and have a fear of using them."

Dr. Rowley adds that your protection level sits at 99% when you use condoms, the 1% chance rests on the very slim prospect of the condom breaking or coming off during sex. "I urge men to try different brands, it's like wearing your friend's runners, they might not fit comfortably!"

That risk increases if:

Dr. Rowley says that "Every single STI is on the rise across the board, all are treatable but not all are curable, some are very painful, and some cause fertility problems. Managing your sexual health is just as important as managing all other aspects of your health."

Remember, you don’t have to live in the city with the highest rate of STIs in the UK to catch one! Risky sexual behaviour, multiple partners and not using protection are the main factors that put you at risk.

Always use condoms and make sure you are getting an STI test whenever you change sexual partner. It's also important to be aware of the fact that you don't need to have sex to catch an STI.

Regardless of what city you live in, the most important thing is to get checked.

If you do have a sexually transmitted infection, getting checked early and accessing treatment is key for your health and to make sure you don’t pass the infection on to someone else.

You should consider under-going a sexual health test if:

If you are worried that you may have contracted an STD, you can contact us directly via live chat or organize a call with a member of our medical team. If you feel that you need to take a test right away, you can access STD testing here.