HIV Symptoms In Men | Your Guide This Pride

This month in honor of Pride, we at LetsGetChecked are answering some of the most common questions around sexual health in the LGBTQIA community.

As an Infectious Disease Specialist, I regularly get asked about HIV symptoms in men, as well as how someone can contract the virus, treatments and the steps one might need to take if they find out they are HIV positive.

In this article I will be answering some of our readers’ most common questions.

What are the most common HIV symptoms in men?
How do you get HIV?
How long does it take for HIV symptoms to become apparent?
Can you tell if a partner has HIV just from looking at them?
Is it possible to continue a physical relationship if you are your partner has HIV?
How and when did HIV become a public health issue?
What are the current stats on HIV today?
Is there less or more of a stigma around HIV today?
Will there ever be a cure for HIV?

What are the most common HIV symptoms in men?

These symptoms may last for a few weeks. Other people may have few or no symptoms when they are first infected with HIV.

It is important to realize that many people are not aware they have been infected with HIV, which is why getting tested is so important. After becoming infected with HIV people may have no (or few) symptoms for many months to years, the rate at which HIV progresses is different for different people. People without symptoms can still transmit HIV to others if they are not on effective treatment.

Untreated HIV will eventually progress to AIDS, where the immune system is so damaged that people will start to get unusual and severe infections or cancers. This is the most serious phase of HIV infection, people with untreated AIDS typically survive about 3 years. 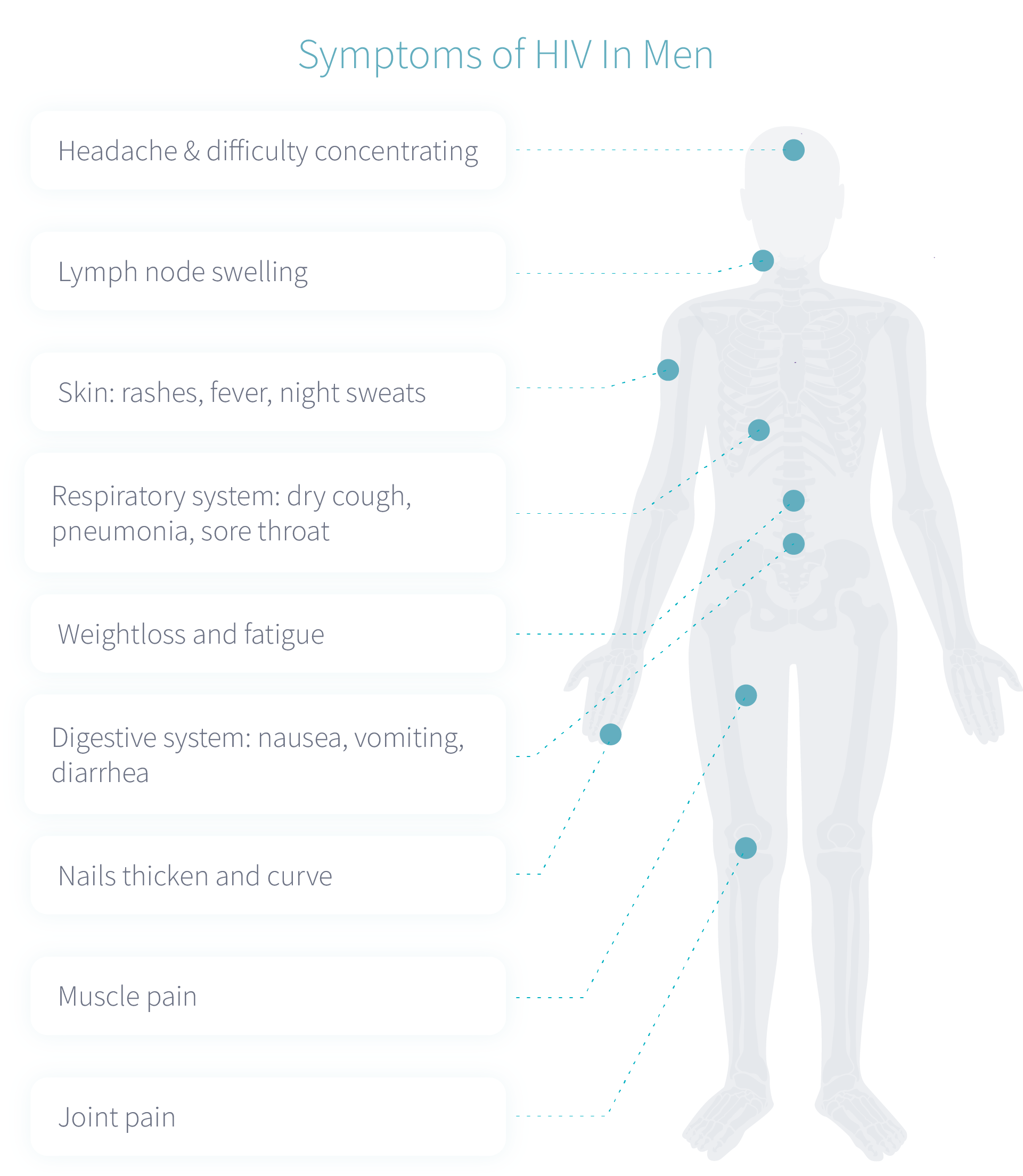 How do you get HIV?

How long does it take for HIV symptoms to become apparent?

The symptoms of HIV typically take 2-4 weeks to become apparent.

Can you tell if a partner has HIV just from looking at them?

You cannot tell if a partner has HIV from their appearance. Before developing serious complications with HIV people may have few or no symptoms, however they can still transmit the virus to others through sex or sharing needles.

Is it possible to continue a physical relationship if you are your partner has HIV?

If you are taking HIV medicines everyday and have no detectable HIV virus in the blood you have effectively no risk of transmitting HIV to a sexual partner. If you have an HIV positive partner you can also take medicine to reduce your chances of getting HIV.

How and when did HIV become a public health issue?

HIV was first noted in the early 1980s. On June 5th 1981 the first medical publication described 5 cases of an unusual fungal pneumonia in previously healthy gay men in Los Angeles. 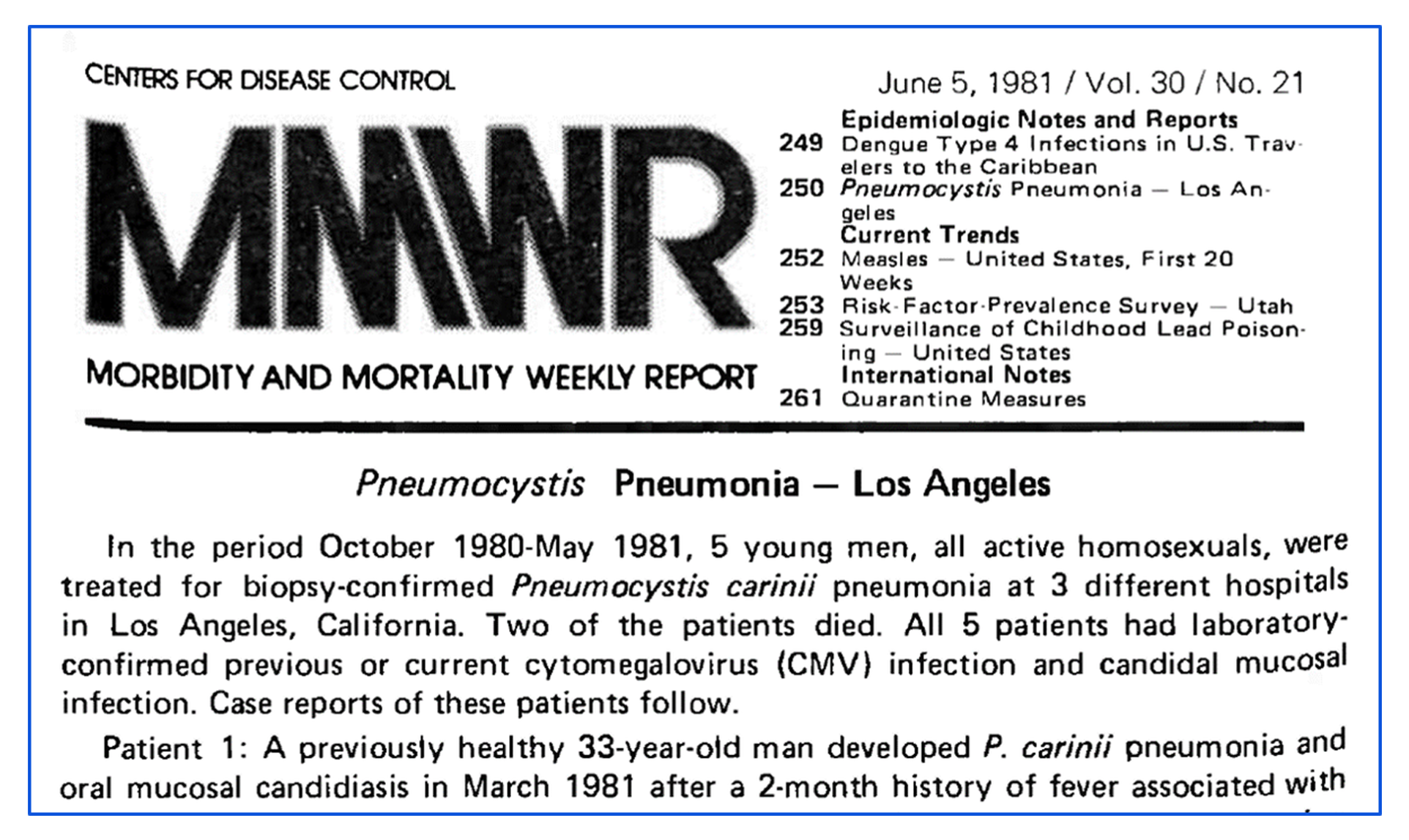 During this time more cases of previously healthy people or infants with fungal pneumonia, Kaposi’s sarcoma (a type of cancer) and other unusual infections were noted. This syndrome of findings was labelled as acquired immunodeficiency syndrome, or AIDS.

At that time, it was known this was a viral infection that could apparently be transmitted through sex, blood transfusion, injection drug use, or from an infected pregnant woman to their baby.

It wasn’t until January 1985 that human immunodeficiency virus (HIV) was able to be identified and was publicly reported as the cause of AIDS. It was shortly after this in October 1986 that the United States Surgeon General advocated for a nationwide educational campaign to increase the awareness of HIV, how it was spread and encourage HIV testing. This included mailing a brochure about understanding AIDS to every household in the United States in an effort to increase public awareness of HIV.

During this time we were able to treat some of the infections and cancers caused by HIV/AIDS, however it wasn’t until 1995 that we had effective widely available medicines to treat the actual HIV infection itself.

After we had effective medicines to treat HIV the death rates from HIV/AIDS began to fall considerably. Now there are highly effective, well tolerated single pill combination therapy medicines to treat HIV. If taken regularly these can suppress the virus to undetectable levels in the blood and allow people with HIV to live nearly as long as those without the infection. 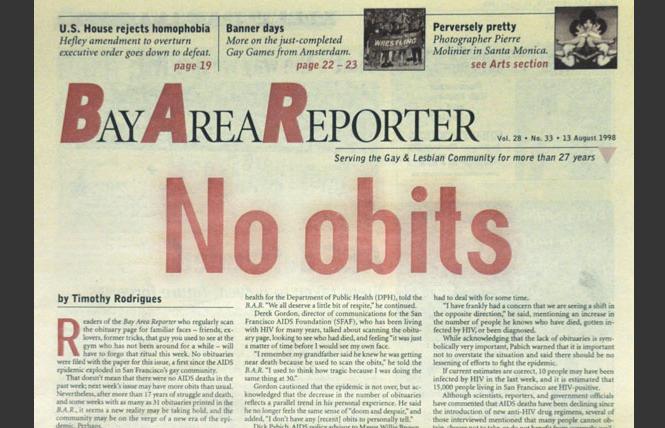 For the first time since HIV and AIDS were recognized in the 1980s the Bay Area Reporter, a local San Francisco newspaper, is able to report that there were no AIDs-related deaths in August 1998. San Francisco was heavily impacted by HIV because of its large gay and bisexual community.

What are the current stats on HIV? Is it more or less of an issue today?

Currently in the United States an estimated 1.1 million people are living with HIV, of those about 1 in 7 do not know about their HIV diagnosis. In 2017 over 38,000 people were diagnosed with HIV in the US; around two thirds of these infections occurred in gay or bisexual men and a quarter occurred though heterosexual contact.

African Americans and Latinos are also disproportionately affected by HIV - together they accounted for two thirds of new HIV diagnoses in 2017.

Overall, the rate of new HIV diagnoses have not changed that much over the past few years, suggesting that there is more work to be done in screening people for HIV, getting them linked to care and started on effective medicines. If there was a way to identify everyone living with HIV and get them on effective medicines we can potentially stop the transmission of HIV in the US.

Is there less or more of a stigma around HIV and AIDs today?

There is considerably less stigma now than in early days of the HIV epidemic, when it was mainly viewed as a disease affecting gay men. This mischaracterization lead to an initially ineffective and slow response from the government to research HIV and AIDS. Political leaders around this time labeled AIDS as “nature’s revenge on gay men”. HIV was commonly referred to as “gay plague” or “gay pneumonia” at that time. The fear of HIV/AIDS lead to many gay men being ostracized from communities, losing their jobs, being turned away from hospitals, or being refused funerals. Advocacy for education and research on HIV/AIDS was closely tied with the growing gay rights movement in the 1980s and 1990s. This movement lead to increased public awareness and decreased stigma.

However stigma around HIV still exists today, this is mostly driven by fear of illness and a lack of understanding of HIV. If more people were aware of how HIV was transmitted, who is at risk of HIV, and how it can now be effectively treated we could considerably reduce the stigma around HIV. In my practice as an Infectious Disease Specialist I make HIV testing a routine part of care for everyone who I see; regardless of why they came to see me, regardless of their gender or sexual orientation, and regardless of how I perceive their risk of acquiring HIV.

Will there ever be a cure for HIV?

At the moment we have very effective medicines to control HIV, these need to be taken every day to ensure there is no detectable virus in the blood. However the medicines we have now cannot eradicate the HIV virus from other places in the body. We are still understanding where and how HIV can survive in the body. There are many efforts focused on curing HIV however at the moment there is no effective cure. It is likely that this needs to be a combination or approaches and treatments to be effective.