STD Symptoms In Men: Should You Get Tested?

STD symptoms in men may start with an itch, burn or a bump. Whatever you may notice first, the infection can sometimes bring with it a major source of anxiety - but, try not to be too hard on yourself; these things do happen and many STDs can be easily treated.

Some of the most common symptoms of STDs in men include:

If any of the above sound familiar, read on for the symptoms of some of the most common STDs in men which will give you an idea of if you should get tested.

STD Symptoms In Men: What You Need To Know

STD symptoms in men can easily be missed and go under the radar. Though, if you have a feeling that something really isn’t right, you need to get screened to rule out sexually transmitted diseases for the sake of you and your partner’s health moving forward.

In the majority of cases, STDs show no symptoms at all. This is why it’s so important to undergo sexual health screening on a regular basis.

Check out the LetsGetChecked STD table, this will help you decide what section of the article you need to focus on! 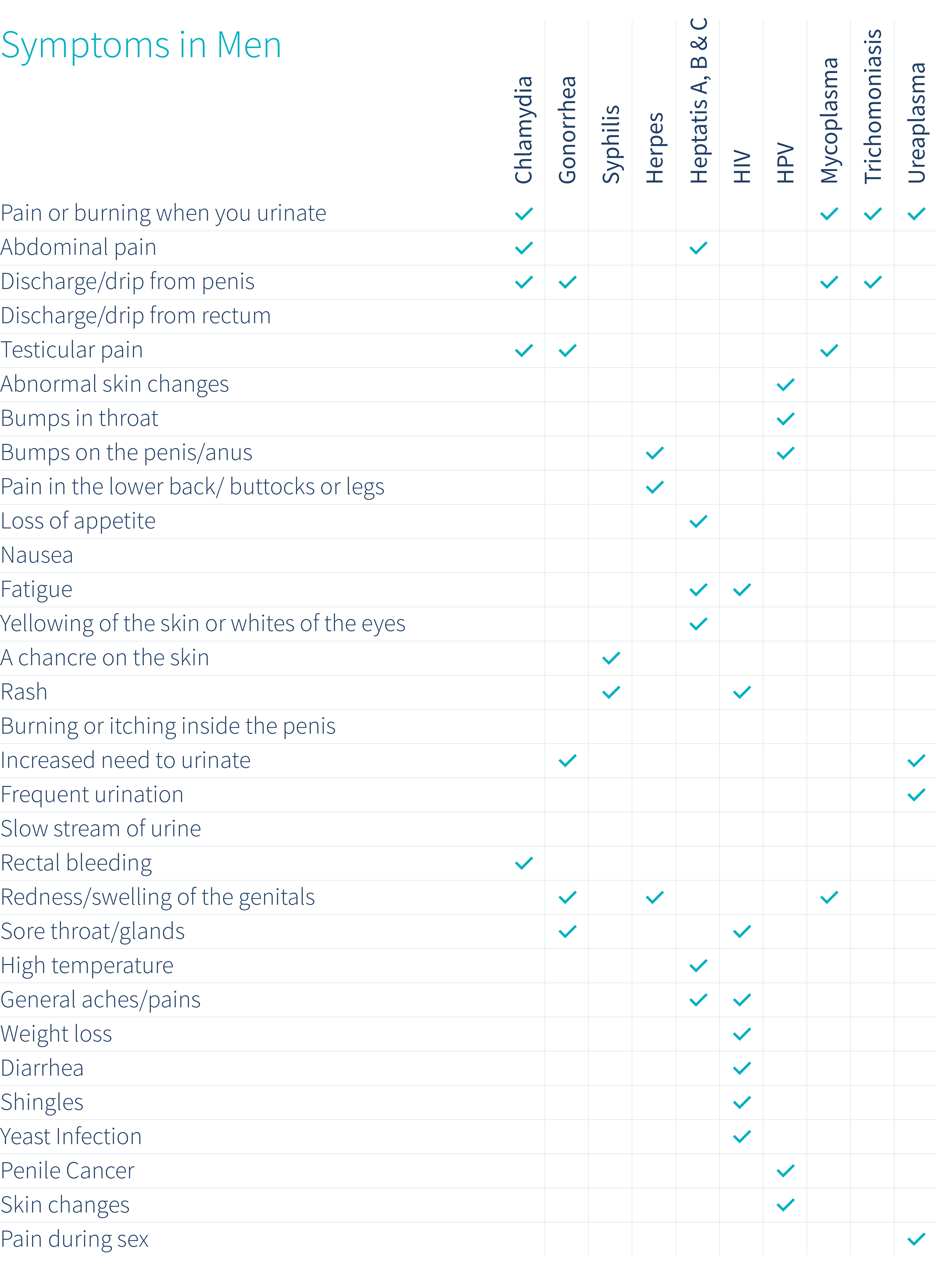 Symptoms Of Chlamydia In Men

Chlamydia is the most commonly reported STD in the world in men and women. In 2019, the World Health Organisation reported that there are 127 million new cases of chlamydia globally each year [1].

The most common symptoms of chlamydia in men include:

Symptoms Of Gardnerella In Men

Gardnerella is recognized as an STD, though more often than not, the infection can be contracted by a disruption in the bacterial balance within the genitals or the overgrowth of anaerobic bacteria [2].

Most of us carry gardnerella at some point in our lives and it shouldn’t be any cause of great concern. Gardnerella is much more common in women than men, though men can also carry the infection.

Symptoms for gardnerella aren't specifically defined, so to ensure you have not contracted it, it may be best to take a test.

Symptoms Of Gonorrhea In Men

According to the CDC, Gonorrhea has been the second most common STD reported in men for a number of years now [3].

Gonorrhea is sometimes referred to as “the clap” or “the drip” due to the fact that one of the greatest tell-tale signs of gonorrhea in men is an unusual discharge from the tip of the penis.

The most common symptoms of gonorrhea in men include:

Symptoms Of Hepatitis B & C In Men

Hepatitis is most commonly used to describe an inflammatory condition in the liver. And, although it’s not an STD, it can be contracted through sexual contact.

Hepatitis may also be an autoimmune condition (in which your immune system attacks your liver cells) or it can be caused by secondary causes such as alcohol consumption, drug use and certain medications.

The most common symptoms of Hepatitis B in men include:

Symptoms Of H.I.V. In Men

H.I.V. (human immunodeficiency virus) is one of the most common STDs in the world. In 2017, it was reported that men accounted for 81% of all new H.I.V. diagnoses in the United States [4].

The most common symptoms of H.I.V in men include:

Symptoms Of H.P.V. In Men

Human Papillomavirus is so common that nearly all sexually active people will carry the virus at some point in their lives.

The side effects of carrying the virus will depend on the type of strain you are carrying. Benign strains of H.P.V may cause genital warts, whereas cancerous strains may lead to cancers of the throat, neck and genitals.

The most common symptoms of H.P.V in men include:

Symptoms Of Mycoplasma In Men

Recognized as a cause of male urethritis, mycoplasma is a small bacteria found in the urinary tract [5].

The most common symptoms of mycoplasma in men include:

Symptoms Of Syphilis In Men

In recent years, it’s been found that the rate of syphilis has been increasing among MSM as well as heterosexual men and women [6].

The stages of syphilis in men include:

The first symptom of primary syphilis is a sore, commonly known as a chancre. Generally, the sore appears at the point of intimate contact and where the bacteria penetrated the skin.

Chancres are painless most of the time, and can be hidden within the rectum or the lining of the penis, this is why it is so important to get tested within the incubation period of syphilis.

The chancre or lesions on your skin generally heal within a few weeks after it first appears. Following this, patients usually report a full body rash that starts on the palms of your hands and soles of your feet. Patients usually feel unwell at this point and report fever, headaches, and skin growths on the genitals.

There are no apparent symptoms during the “Latent Syphilis” stage, this is often referred to as the “hidden stage of syphilis.”

Tertiary syphilis occurs when symptoms return. The tertiary stage can take years to develop. It is often the period that follows the unsuccessful detection of syphilis.

Tertiary Syphilis can affect your organ systems - including the heart, the brain and the nervous system.

Symptoms Of Trichomoniasis In Men

Though trichomoniasis is more common in women than men though it may still affect men and 30% of those infected will not develop any symptoms [7].

The most common symptoms of trichomoniasis in men include:

Symptoms Of Ureaplasma In Men

The most common symptoms of ureaplasma in men include:

If you’re experiencing symptoms you should take an STI test and or/consult your doctor.

Some infections may not test positive until weeks after exposure so consider taking a broad test panel after at least 1 month to check whether the infection is now detectable.

You have received a notification from a previous partner that they are infected (STIs can remain dormant for years and/ or take up to three weeks to become detectable.)

Take a look at some of the LetsGetChecked STD testing options that allow you to take the test from home at a time that suits you.

With the LetsGetChecked tests, you don’t need to worry about taking time out of your busy schedule, having to visit a doctor’s waiting room or needing to speak with someone face to face.

Your results will also get to you within a week along with prescription options for certain infections.

STD treatments for men depend on the type of STD you have including the intensity of that STD.

In most cases, if you do receive an STD diagnosis, treatment will involve a round of antibiotics, antivirals and/or a topical cream.

The type of medication you receive may differ depending on where you’re from.

If you’re concerned that you may have an STD, you can contact us directly via live chat or schedule a call with one of our nurses who are here to offer your support and guidance at every step of the way.

What is Chlamydia? | Symptoms, Diagnosis and Treatment