What Is Cervical Cancer?

Cervical cancer occurs when the cells of the cervix become mutated or experience genetic changes.

What is cervical cancer?

First things first, let’s talk about the cervix, and where it is!

The cervix is located in the lower part of the uterus that connects to the vagina.

This is where the cervix is located within the female reproductive system: 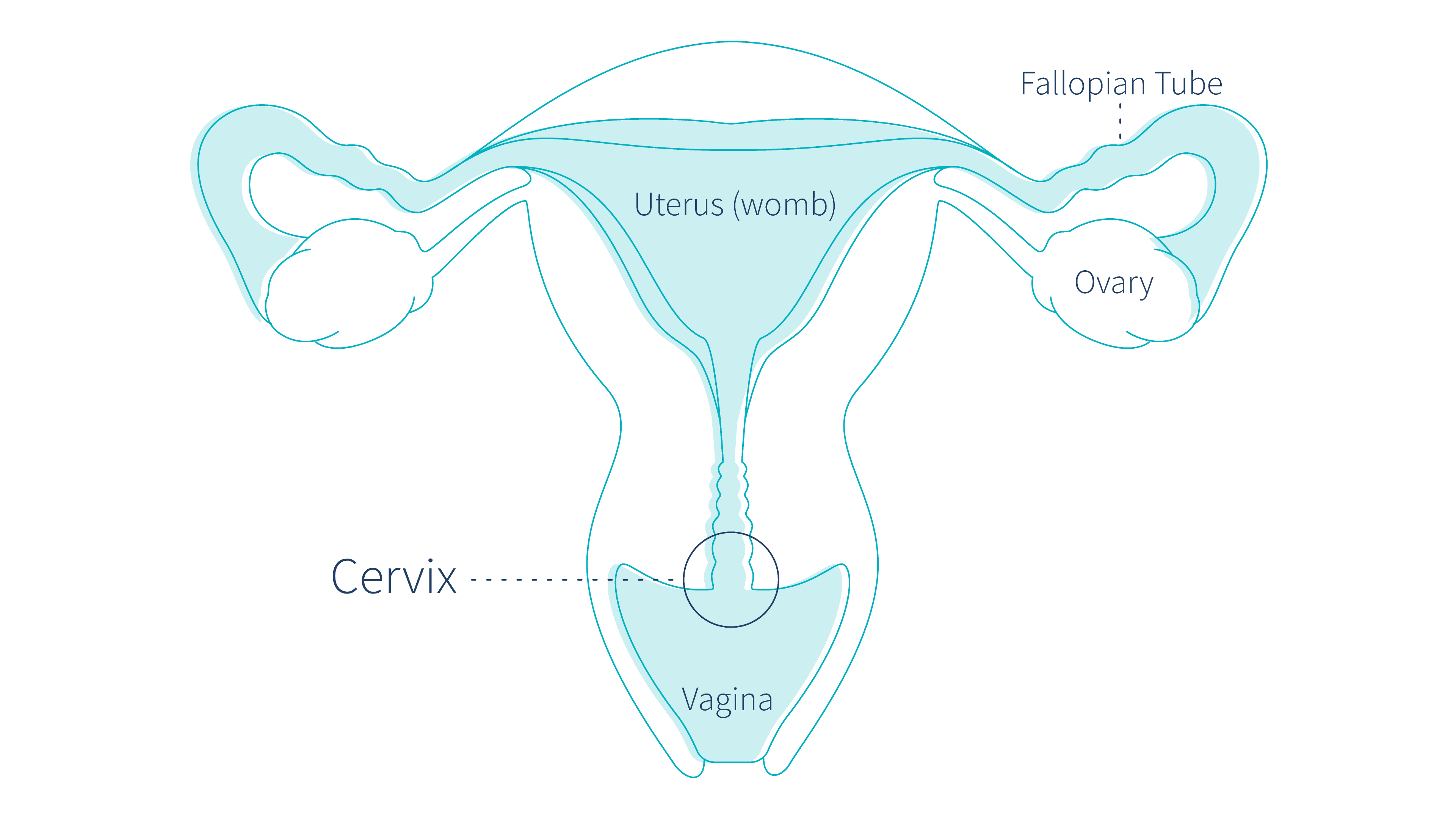 Cervical cells may acquire genetic changes for a number of reasons.

Most commonly, cervical cancer is caused by a viral infection called the human papillomavirus virus (HPV), but how does this happen?

Dr. Kelly says "“HPV” stands for human papilloma virus and it is named for the warts (or papillomas) that some types of HPV cause. There are about 100 types of HPV. Each type of HPV in the group is given a number, which is called its HPV subtype."

We will dig into HPV soon but it’s important to remember that cancers occur when a stimulant triggers mutation in your cells.

Often, cancer is a result of the body’s immune system being unable to cope with an infection.

In a healthy body, our cells grow and divide for a set time, carry out their functions for a set time and die after a set period of time. This is known as the cell cycle or cell division cycle.

If a high-risk cancerous infection goes undetected for a prolonged period of time, normal functioning cells will become mutated, multiply and won’t die when they should.

Traditionally, little has been known about what causes cervical cancer, bar the fact that HPV is somewhat involved in the process.

Let’s take a look at some of the background when it comes to cervical cancer and genetics. 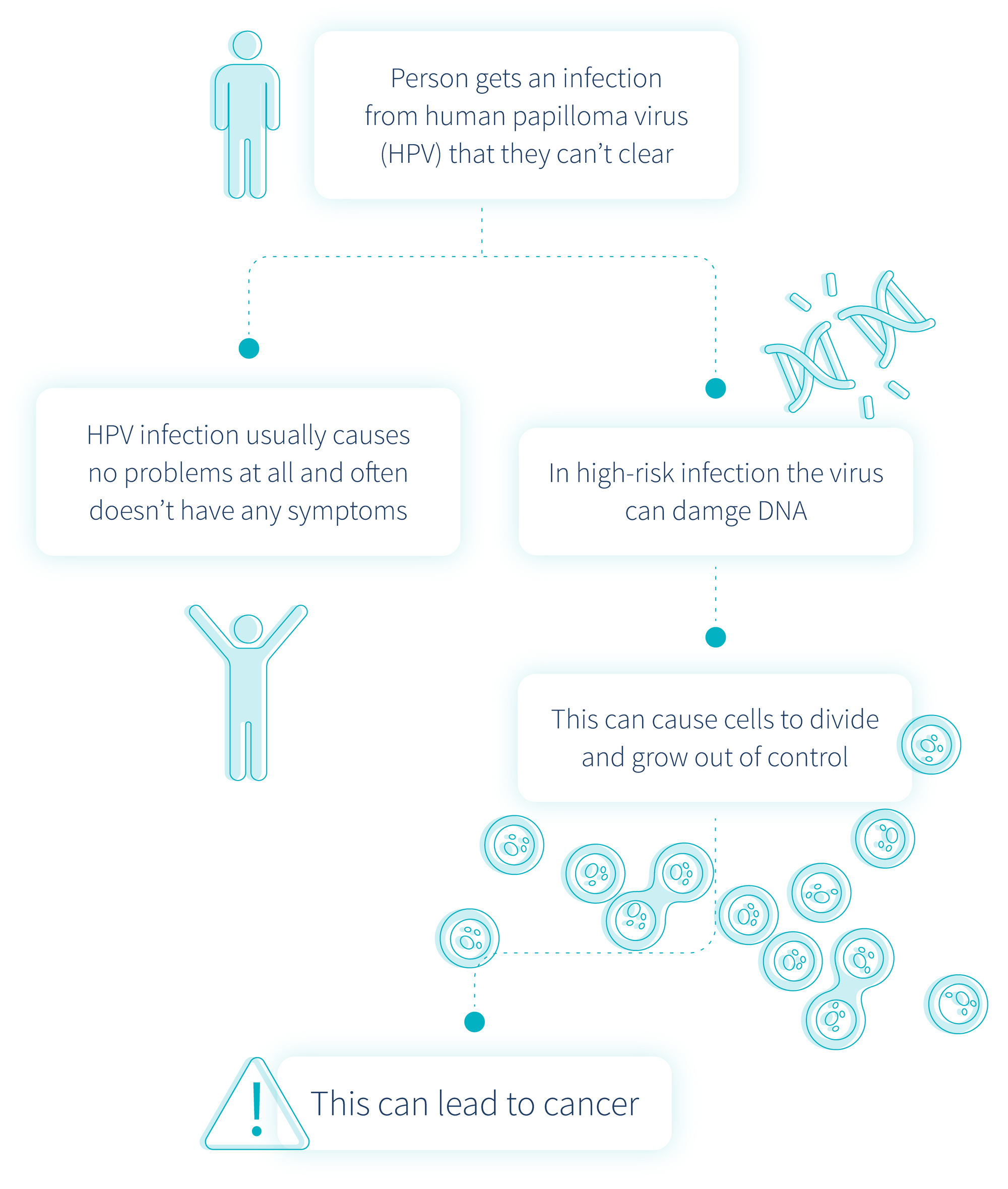 One of the biggest risk factors connected to cancer depends on your DNA or genetics. Let’s simplify this. A large majority of people are likely to look like their mother or their father. You might have your dad’s eyes or your mom’s nose, and that's because you share genetic material.

We mentioned the cell cycle earlier. Some of our genes control when cells grow, divide and die.

Therefore, it can be surmised that one of the biggest factors that are included in your cancer risk is your genetic makeup.

What are the risk factors for cervical cancer?

Let’s delve into other risk factors of cervical cancer...

You Have Contracted A High Risk HPV Infection

We have spoken about HPV but let’s look at how it actually causes cervical cancer.

If you are infected with a high risk strain, you are more likely to develop cervical cancer.

HPV causes the production of two proteins known as E6 and E7. These proteins cause tumour suppressor genes to “switch off”, thus leaving your immune system to go into overdrive, producing too many cells on the lining of the cervix and allowing for cell changes which ultimately lead to cervical cancer.

HPV infection is common and there is no cure. Sometimes the body will be able to clear the infection itself, however, without screening you are at a higher risk of developing chronic conditions and cancer.

You Are A Smoker

Numerous studies have shown that tobacco byproducts or what’s more frightening, tobacco-specific carcinogens have been found in the cervical mucus of those who smoke, which paints a picture of the severe connection between smoking and your cancer risk.

In one long-term study which looked at the connection between current, former, non-smokers and cancer, it was found that:

Researchers say that smoking works in two strands that puts smokers at a higher risk of developing cervical cancers:

You Have (Had) A Sexually Transmitted Disease

Chlamydia is the most commonly reported sexually transmitted disease in the world after HPV.

According to a number of studies, a diagnosis of both chlamydia and H.I.V. are connected to cervical cancer.

You Have Had Multiple Full-Term Pregnancies

If you have had over 3 full-term pregnancies, you increase your risk of developing cervical cancer, however the reasoning behind this is unclear. It is believed that hormonal and physical changes during pregnancy can alter the cells of the cervix as well as making you more susceptible to HPV infection.

You Have A Family History Of Cervical Cancer

We touched on how your genetics can make it more likely for you to develop cervical cancer. Some researchers suspect that some instances of this familial tendency are caused by an inherited condition that makes some women less able to fight off HPV infection than others.

What are the symptoms of cervical cancer?

Women with cervical cancer often do not show any signs or symptoms of the cancer during the early stages. As the cancer develops and grows (metastasizes) and invades other nearby tissues, women may begin to experience physical symptoms that are often localized in the vagina.

Other symptoms of cervical cancer include: 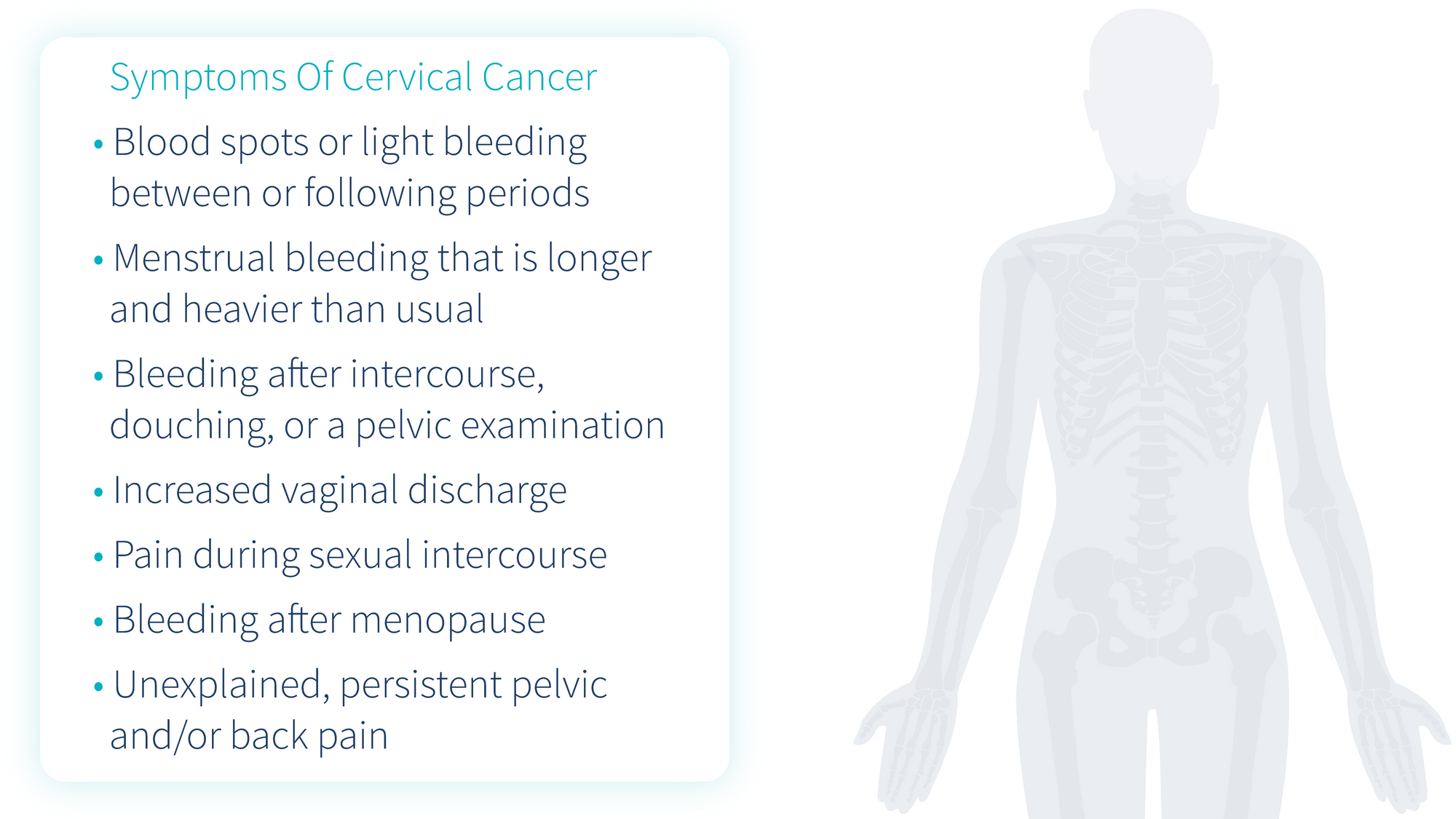 How often should you get screened for cervical cancer?

It is recommended if you are sexually active that you have a HPV test done regularly.

Dr. Kelly says "Women in their 20s are advised to get Pap smears, not HPV tests, because the virus is so common that most would test positive for infections that would most likely clear up on their own."

Recent research shows that HPV tests may be more effective than traditional pap smears. If you are concerned or curious about getting tested, you can visit www.letsgetchecked.com and talk to a member of your team via our private messenger or purchase one of our at-home HPV tests.

All women should begin screening for cervical cancer at the age of 21.

However, more recently, there has been emerging studies that say regular HPV testing is more effective than a pap smear.

Dr. Kelly says that there are a number of reasons for the controversy between doing a pap smear or a HPV test.

Since the HPV test was introduced 15 years ago, cervical cancer screening guidelines continue to change. Currently, most medical groups recommend that women age 30-65 get both an HPV test and Pap smear every 5 years (co-testing), although a Pap test alone every 3 years is an acceptable alternative.

The treatment for cervical cancer includes a hysterectomy, chemotherapy, and radiation.

Smear tests check for abnormal bacterium before they develop into cancerous cells. Any woman who has been sexually active should get tested. Unfortunately, there is no accurate HPV test for men. The best way to avoid getting a sexually transmitted infection is to practice safe sex, by using condoms and having regular sexual health screenings.

When it comes to screening, Dr. Kelly says there are accurate and high quality tests out there that no one should be for-going; "The bottom line is that, unlike most cancers, there are excellent screening tests for cervical cancer. What’s most important is to be screened, regardless of which protocol is followed. All medical professional groups recommend that average-risk women get screened at regular intervals between the ages of 21-65. Women at higher risk for cervical cancer may require more frequent screening/monitoring."

You should consider taking a HPV test if:

This Cervical Cancer Awareness Month, educate yourself on the steps you can take to reduce your risk of cervical cancer and the screening options of getting screened.

Dr. Kelly's main advice is that screening is necessary and likely to massively reduce your risk of cervical cancer and says:

"I recommend both different screening options (HPV tests and pap smears) based on the age of the women and her risk category."

How Can You Screen For Bowel Cancer From Home?

What are the Risk Factors Associated With Bowel Cancer?

What Causes a Change in Bowel Movement?