What Is Estrogen Dominance?

This condition is most common in women over the age of thirty five with symptoms of estrogen dominance often varying from moderate to severe.

Estrogen dominance may also affect men, though the condition is less common in men.

What Is Estrogen Dominance?

Dr. John R. Lee pioneered the term "estrogen dominance". This is when there is not enough progesterone in the blood to balance the effects of estrogen.

If you have heard of estrogen dominance but you are still unsure about what estrogen is, you can read our latest article: What Is Estrogen? ahead of this article to equip yourself with the know-how you need to get started on learning more about your hormones.

Estrogen dominance can affect both men and women, however it is more common in women, especially in women who are approaching the menopause.

Estrogen and progesterone are the two most prominent hormones in females.

Estrogen and progesterone work in conjunction with one another to carry out a number of primary functions in women. 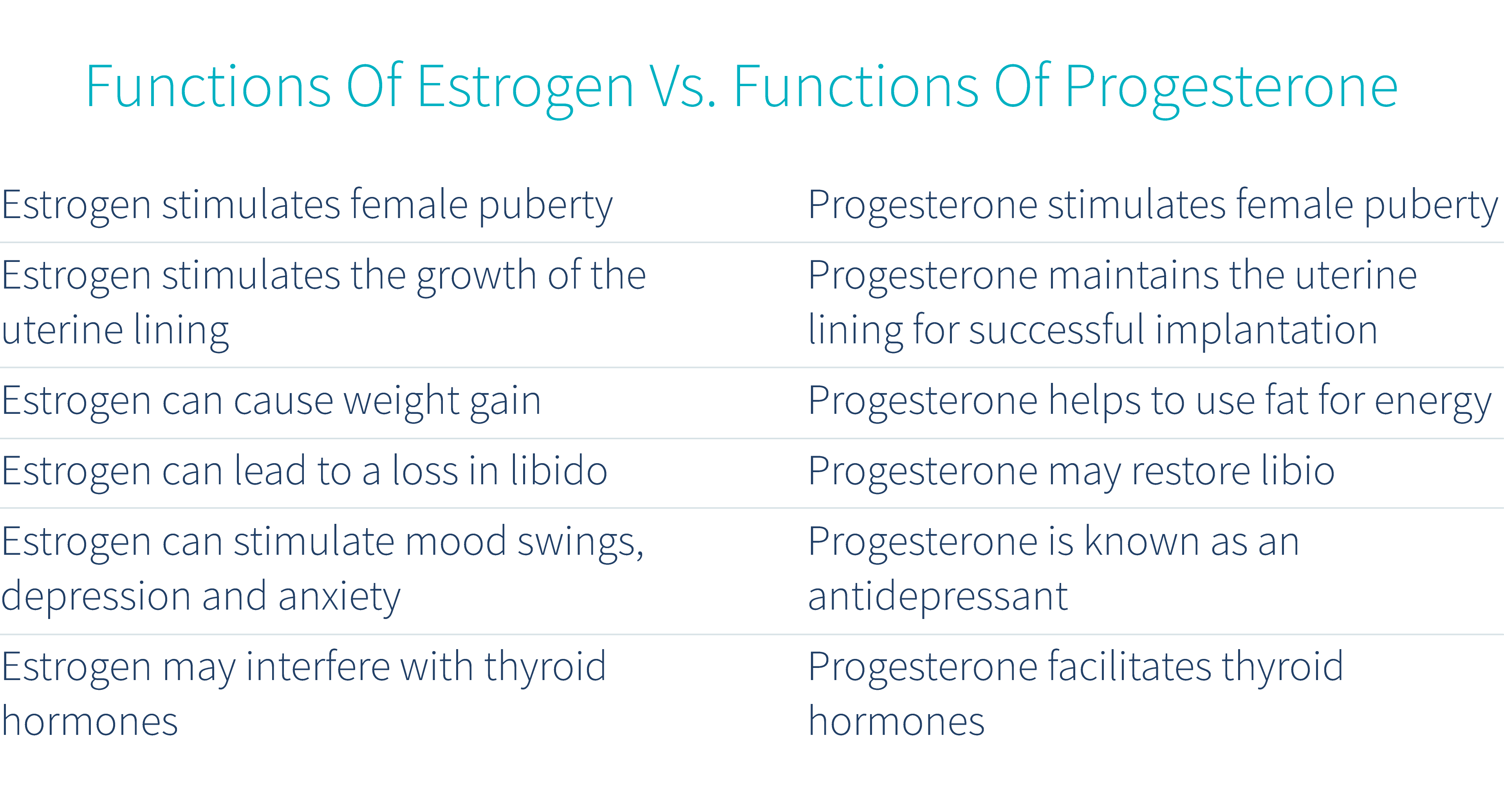 Estrogen
Estrogen is known as the “female” sex hormone. Estrogen helps regulate the menstrual cycle, controlling the growth of the uterine lining during the first part of the cycle. It is primarily produced in the ovaries, however, it is also produced by fat cells and the adrenal glands.

In another article, we spoke about the effects of estrogen on weight, particularly in men. Men who have increased levels of estrogen in the body have a far higher likelihood of being overweight.

Watch this video with Dr. Dominic Rowley to learn more about estrogen:

Progesterone
Progesterone is another “female” sex hormone. It is released by the corpus luteum (the shell that develops in the ovary once the egg breaks free and starts its journey from the fallopian tube to the womb.

Progesterone prepares the body for pregnancy in the event that the released egg is fertilized. If the egg is not fertilized, the corpus luteum eventually fully breaks down, with the production of progesterone decreasing and a new menstrual cycle beginning.

Watch this video with Dr. Dominic Rowley to learn more about progesterone:

Overall, the functions of estrogen and progesterone can either be complementary or work in opposition to one another to produce a range of everyday symptoms and side effects.

Your levels of estrogen and progesterone fluctuate with the beginning of your menstrual cycle.

When you start your period, your body is producing some estrogen and almost no progesterone. Just before ovulation, your estrogen levels increase dramatically and they are involved in a process which stimulates the release of the egg from the ovaries.

This graph illustrates the rise and fall of hormones during your cycle, indicating when you should take a female hormone test. 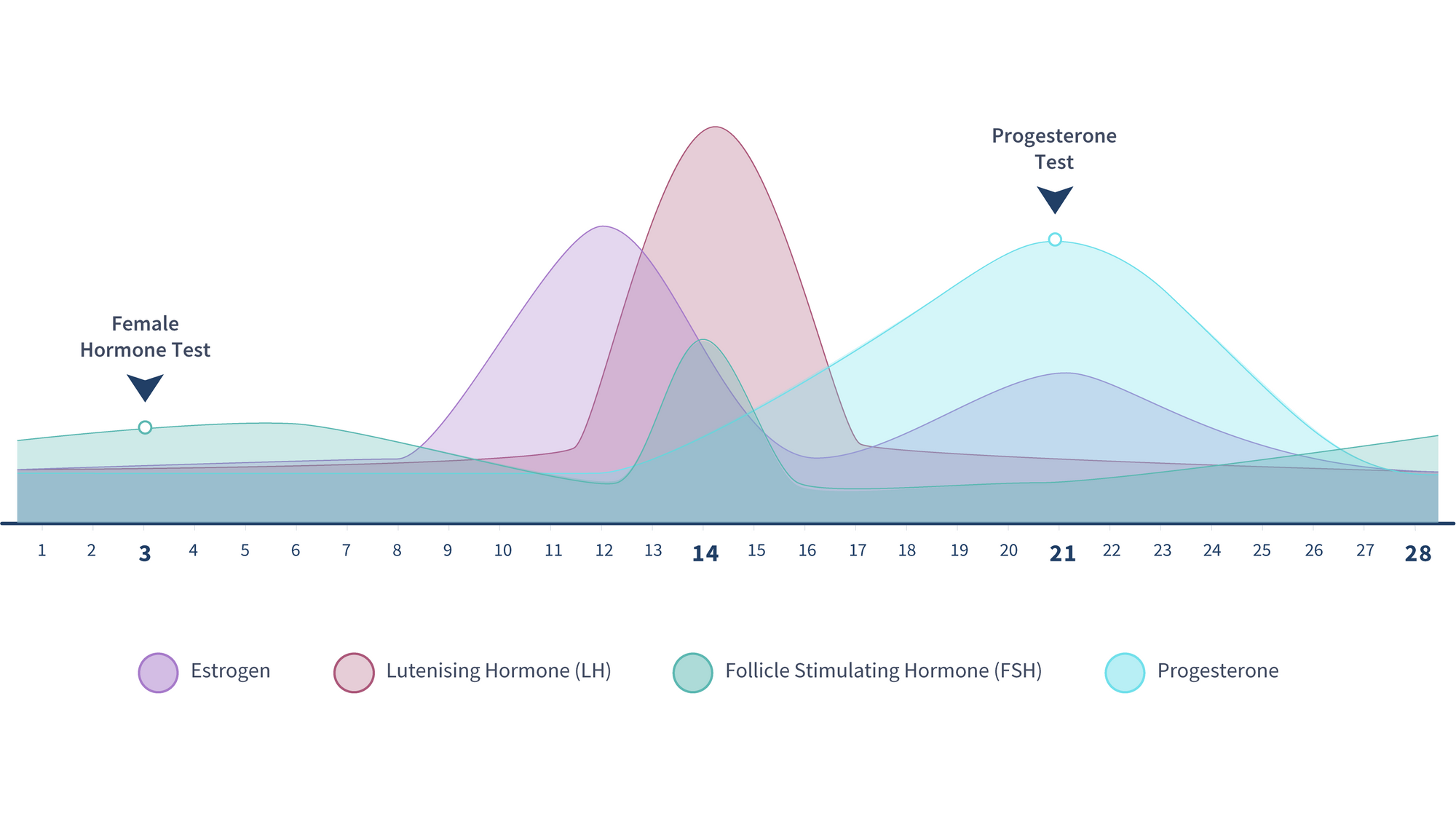 Let’s take a look at some of the risk factors for estrogen dominance.

Age
Estrogen dominance is more likely in women from the age of 35 and upwards. As women begin to move further away from their reproductive years, there is a higher likelihood that they will experience hormonal fluctuations. In this case there is a higher likelihood that the effects of estrogen will outweigh that of progesterone. For instance, estrogen will likely drop by 35% whereas progesterone is likely to drop by 75%.

Birth Control
It is reported that 60% of women use some form of contraception. A large proportion of contraceptives use estrogen in order to prevent pregnancy. Synthetic estrogens may prevent pregnancy but depending on the brand and how often you take your birth control, you may be preventing the drop in estrogen which occurs during the shedding of the uterine lining which in turn may lead to increased levels of estrogen and low levels of progesterone.

Diet
There are claims that foods containing phytoestrogens may impact on your risk of developing estrogen dominance. Read: “Foods That Increase Estrogen: Do They Actually Exist?” to gain more insight into the role that your diet may have on your estrogen levels.

What Is Estrogen Used For?

Estrogen is used for a number of different purposes and may be necessary at different stages of a female’s life.

Synthetic forms of estrogen are most commonly associated with birth control but estrogen containing products are also used to control acne, PMS symptoms and menopause in the form of hormone replacement therapy (HRT).

Some of the most common uses of estrogen include:

Birth Control
Estrogen is used in birth control to prevent pregnancy. Estrogen carries out its role in contraceptives by blocking the release of follicle-stimulating hormone (FSH), blocking the production of luteinizing hormone (LH) and preventing ovulation, which is a necessary process for healthy conception.

Treatment For Acne
Estrogen containing drugs are often prescribed to those who are suffering with hormone-related acne. During puberty, it is common for testosterone to rise in women and for estrogen to fluctuate which may lead to acne. Later in life, during pregnancy and the menopause, decreasing volumes of estrogen may lead to adult acne. Doctors often prescribe estrogen containing medication to regulate circulating estrogen in the blood and therefore improve acne.

Hormone Replacement Therapy
During the menopause, estrogen containing therapies are often administered to women to reduce the symptoms of menopause. Most frequently, women are likely to suffer from hot flashes, as well as vaginal dryness. The purpose of hormone replacement therapy is to regulate hormones returning them to the levels that they would have sat at pre-menopause. Hormone replacement therapy may be administered through gels, injections or oral medications.

Most hormone therapies will require a face to face consultation that takes your medical history and current symptoms into account which is why it’s important to know your hormonal status.

If you are still unsure about whether or not you might be living with estrogen dominance, read our latest article to get to grips with some of the symptoms you may be experiencing.

Read: Do You Know The Signs And Symptoms Of Estrogen Dominance?

How do Fertility Tests Work?

Painful Sex in Women: What Causes Pain During Sex?