Exercise Of The Month: What Is Yoga?

What is yoga? Whether it's deep breathing exercises or weight training yoga, new variations of the practice seem to be developing all over the world.

December can be a stressful time for all of us. Friends, family, presents and merriment can actually offer up a very real source of stress. This month, we want to help you tackle festive stressors with our first tried and tested exercise of the month, yoga!

It is never too late to take up a new hobby, especially when it offers numerous health benefits. LetsGetChecked are here to tell you everything you need to know about yoga including its origins, health benefits and hints and tips from our yoga guru, Kayla Kleinman.

The word yoga originates from various meanings including “to join” “to yoke” and “to unite.”

Put simply, yoga is a work-out that doesn’t just put pressure on the body but also asks for mental concentration which allows for both your body and mind to reach a relaxed state and unlike most work-out techniques, yoga is rooted in spiritual practices.

Yoga is an ancient Hindu practice than involves specific body movements, controlled breathing and meditation. It was first developed in India, over 5000 years ago, the science of yoga is said to have been founded by Shiva, the first Yogi and Adiyogi as the first guru.

Ancient scriptures continuously refer to the connection between man and nature which is a representation of joining the mind and the body together in unity. Traditionally, yoga has been seen as a path to self-actualization in which yogis experience "independent freedom" or a "state of liberation."

“Self-liberation” can have different meanings depending on the person, what we do know is that literature regarding yoga says it will not just make your body feel good, but it will activate the feel good endorphins that go with it.

Fast forward to today and different variations of yoga have become popular ways of working out, escaping the chaos of day to day life and watching your waistline.

The CDC reports that those who practice yoga has more than doubled between 2012 and 2017 in U.S adults. Yoga hasn’t just become trendier, it’s also become a more widely used practice among the health and fitness community. 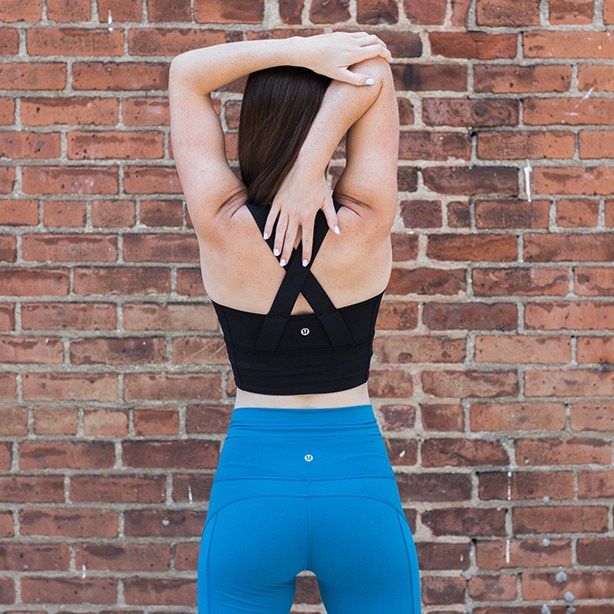 What Are The Health Benefits Of Yoga?

There are numerous studies out there that proclaim that the benefits of yoga are infinite. Yoga has been said to relieve depression, anxiety, PTSD, fatigue, stress management, cardiovascular diseases, blood sugar levels, epilepsy and even certain cancers.

Let’s explore how yoga can improve your physical and emotional health on a day to day basis.

This is good news for those who are living with type 2 diabetes or for those who want to keep an eye on their blood sugar! It is probably no surprise that exercise is a beneficial for your overall health, however it has been found through 33 studies that yoga can also improve your blood sugar. These studies report that yoga can promote glycemic control, lipid levels and body composition, all of which are essential for managing diabetes. More limited studies that included smaller sample groups and fewer variables also report that yoga can lower blood pressure and enhance pulmonary and nervous system function.

There is a limited number of clinical studies out there that have looked at the connection between cholesterol and yoga however, those that are published promise a positive correlation between your cholesterol levels and your yoga practice. In one study, it was shown that total cholesterol may drop by 30%, bad cholesterol known as LDL may decrease by 14-30% and good cholesterol, also known as HDL may increase by upto 12%. Yoga in this instance has been shown to decrease your cardiovascular risk score by eliminating one of the leading factors associated with heart disease, high cholesterol. 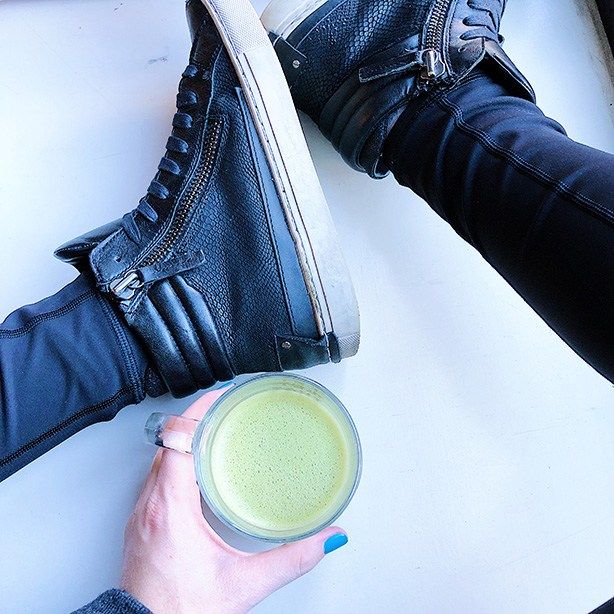 The mind-body connect is said to improve your perception of yourself according to a study by the University Of Minnesota. Their findings reported that 83% of those who practiced yoga at least 30 minutes per week had positive body image. As yoga emphasizes the importance of mindfulness which is defined as the act of being present in the moment, yoga may improve your body image through allowing you to take stock on not just what your body looks like but what it is physiologically capable of doing everyday.

Yoga can aid in balancing your hormones in a number of ways. A study published in the International Journal of Sport Studies reports that practicing yoga leads to a reduction in your stress hormone cortisol. Within the sample, Group A took part in two weekly 90 minute yoga classes for 3 months. Group B donated their blood for the purpose of the study but did not participate in the yoga classes. The results of the study concluded that regular yoga classes significantly reduced circulating cortisol in the blood, especially in individuals who felt chronically stressed out prior to the study.

Yoga is said to have shown some benefits when it comes to treating and regulating depression and anxiety. Yogic or controlled breathing has been shown to impact the nervous system. In particular, ujjayi, bhastrika, sudarshan breathing techniques are said to promote increased parasympathetic drive, calming of physical stress response symptoms, the release of feel good hormones and thalmic generators.

Kayla In The City Shares Her Yoga Secrets 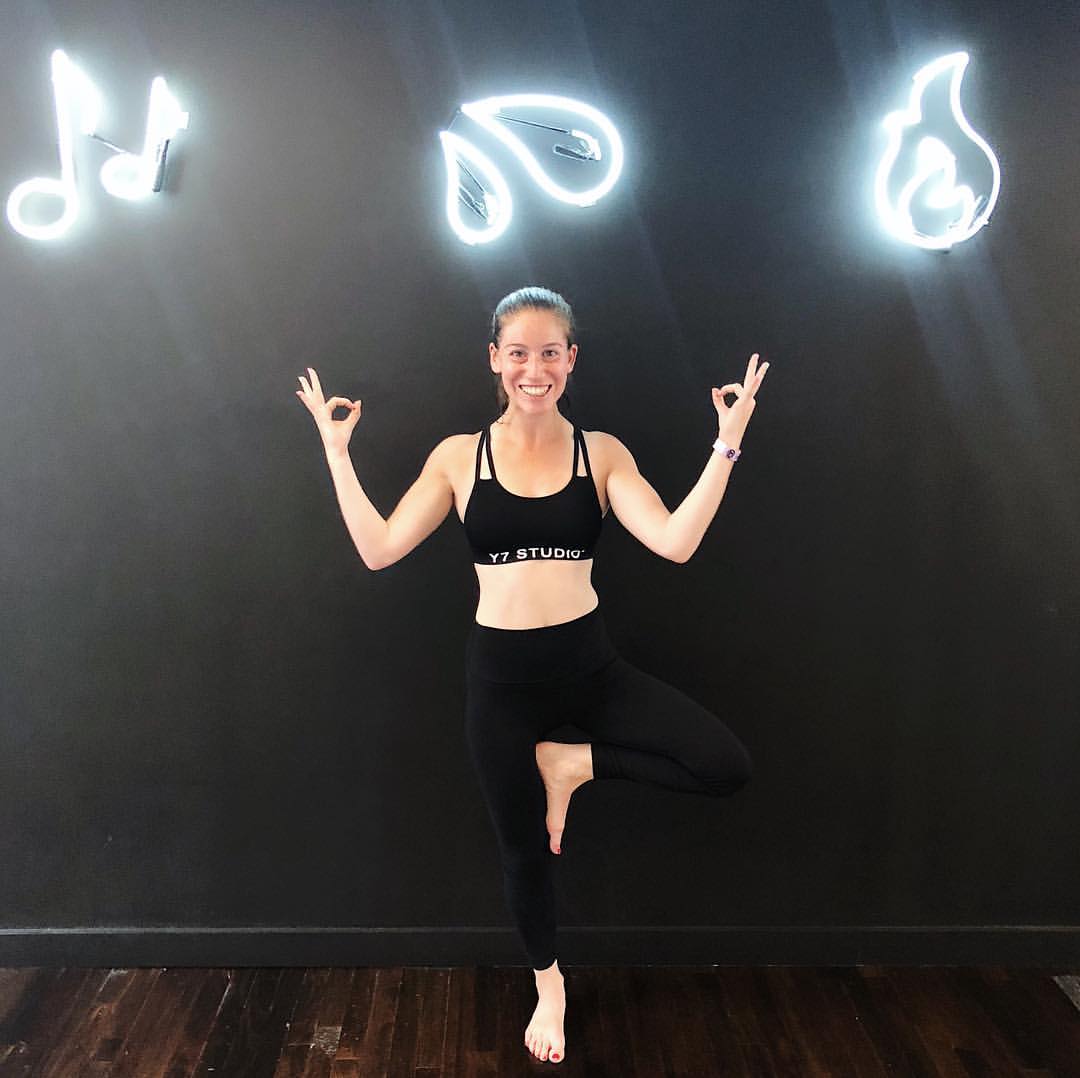 What is the purpose of WELL- rounded?
I launched my podcast WELL-rounded as another way to share content in addition to my blog Kayla in the City. The purpose is to talk about a more well rounded approach to wellness. I’m a big believer that there’s so much more to wellness than working out and eating kale.

How did the podcast get started?
I’m a huge fan of podcasts, I’m constantly listening to them while I’m walking from place to place or doing chores around my apartment. As a former theater major I love to talk and thought it would be a fun platform to explore as a content creator.

When did you get into yoga and when did you become a yoga teacher?
I was first introduced to yoga way back in high school. We actually did a yoga unit in gym class, which is pretty spectacular now that I think about it. I thought it was okay at that point, I liked it a whole lot more than playing dodgeball but I didn’t love it.

It wasn’t until my senior year of college that I started to learn to love yoga.

As an uptight, Type-A, New Yorker I knew it would be good for me. I had no idea that I would learn to love it so much and eventually become a yoga teacher.

After dabbling in the fitness scene as a personal trainer, group fitness instructor and social media manager, I eventually did my yoga teacher training in June 2016. 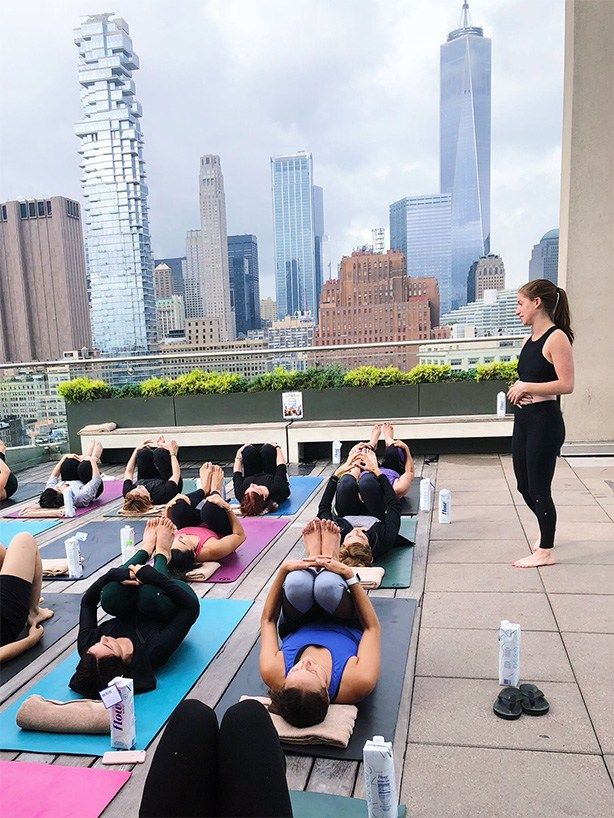 Do you think yoga is overlooked as a work-out option?
I think it really depends, a yoga class can look like SO many different things. Some are certainly more athletic and work-out based than others.

Why do you think it is?

I think in New York there is a ton of super athletic based studios (two of which I teach at: CorePower Yoga and Y7). In Yoga Sculpt at CorePower we literally use weights, but I believe it’s still a yoga class because we are focused on breathing, doing Sun Salutations, ending in savasana and still close class with a namaste.

What are the biggest health benefits of yoga? What can yoga do for you that other workouts can’t?

The biggest benefit I’ve personally experienced from yoga is that it’s really helped me deal with stress in my life. Thanks to yoga I’ve learned to breathe through difficult moments and my body knows that tough stuff is only temporary. I don’t know where I’d be if I hadn’t fallen in love with yoga in college.

There is lots of information out there about the power of meditation on the body and mind, what have you found yoga has done for you from a physical and spiritual perspective?

Oh man, there’s so much to say. It’s almost hard to remember all the ways yoga has changed my life because it’s been a part of my life for a number of years now.

I’ve dealt with jaw issues for much of my life, I was born with a malformed jaw joint and experience a lot of TMJ pain because of it. I firmly believe that yoga has made a huge difference with my jaw, to the point that I forget I even had an issue. I think in destressing and releasing tension through yoga it allowed me to put less pressure on my jaw joint.

I also suffer from a pretty severe phobia. It’s something I have to deal with every day. My yoga practice on the mat has helped me off the mat and I’ve learned how to better deal with this phobia so it’s not as much of a hindrance on my day to day life.

I’ve learned so much about breathing and how powerful the mind is. Knowing this and knowing that power, it’s really helped me during times when I’m dealing with this phobia.

What are the three things you need to bear in mind if you want to bring yoga into your day to day life?

Be patient. Know that you won’t be able to hold every posture right away. It’s called a yoga practice for a reason - ya gotta practice!

Every day is different. Some days your practice will feel easy. Other days not so much.

Go in with an open mind.

How do you think yoga fits into a digital world?

I think yoga is so important because we live in this digital space. I’m grateful that during that hour on my mat I’m not staring at a bright screen and analyzing how many likes my last photo got.

It’s truly an opportunity to be present, which is something we don’t do all that often because we’re constantly on our phones.

What has been your greatest health triumph?
Running the NYC marathon in 2015. I’m SO not a runner and still can’t believe it really happened.

What has been your greatest health downfall?
I don’t cook a lot. It’s just not a passion of mine. Plus my NYC kitchen is teeny tiny.

What does your health mean to you?
I’m constantly grateful for my health and that my body allows me to do what I love.

Keep an eye out for my upcoming feature which will document the LetsGetChecked yoga challenge. I will be doing one hour of yoga a day for the next thirty days, documenting my cortisol levels before and after the challenge. I will also be sharing my experiences of dedicating one hour a day to yoga as a complete beginner. Stay tuned!

The Signs And Symptoms Of Lyme Disease | Your Guide

Lyme Disease: Have you been bitten by a deer tick?