Food allergy testing is a topic that often sparks debate. Worldwide, there is a higher diagnosis rate of food allergies today than there ever has been.

The increased motivation to get tested is spurred on by two things.

On a positive note, we have more education around nutrition and the way food makes us feel.

On a more sinister note, there are marketing ploys being made to consumers to make them think that they have a food allergy, and even worse, companies who are selling unregulated home testing kits that offer up false negatives and false positives, these tests put the consumer at a much higher risk.

My name is Ronan Ryan. I am the Chief Operations Officer for LetsGetChecked and in this article, I want to tell you why LetsGetChecked don’t do food allergy testing.

I joined LetsGetChecked four years ago as the first employee under our CEO’s vision to make relevant laboratory testing more accessible.

Globally there is a shortage of doctors, while the incidence of heart disease, diabetes, cancer etc. are increasing. Access to testing hasn’t improved.

Today, one of the most efficient parts of the entire healthcare system are the laboratories. In the USA, they account for only 3% of the healthcare spend even though they are used in the majority of healthcare decisions.

My own experience with laboratory testing had been limited to standard bloods which were inconveniently collected through the process of attending my physician, then attending a collection centre a few days later before calling to receive my results.

I have also had experience with allergy testing which typically does not follow traditional lab processes. I had an anaphylactic reaction when I was 16 after my parents had taken me out to dinner after school exams.

I pretty much only ate fish at that time - I wasn’t a fan of meat. I ate fish for my starter and my main course and by the time dessert came, I felt so ill that I told my parents I was going to go home to bed.

I walked the five minutes home and got ready for bed. I felt terrible and struggled to call for my brother but couldn’t because my tongue had swollen so much that I couldn’t really talk.

My brother called my mother who was still at the restaurant and described my symptoms. Thankfully she is a nurse and raced home before driving through red lights to get me to the local hospital in a matter of minutes. I was given a variety of medicines, placed on a nebuliser to help my breathing and I recovered in a couple of hours.

It was clearly an anaphylactic allergic reaction but we weren’t sure what had caused it since I had eaten fish my whole life. The restaurant gave us samples of all the ingredients in both dishes I had and we went to an allergy specialist. The standard test there is still the same today. They put allergens on your skin in little drops and label them as they do so.

Physicians then prick your skin at each location and wait to see if there are any reactions. There is a control for histamine. I had a number of severe reactions to fish but not to shellfish. I also had severe reactions to both chicken and pork which I had eaten for lunch that day. The doctor was very honest with me stating that this is a grey area of medicine, he sees false positives all the time and that I could likely continue to eat chicken and pork but under no circumstances was I to eat fish. Shellfish was equally off the menu since they are nearly always prepared together.

Over the years, I have had a number of reactions to compound that I definitely have a severe fish allergy. I am extremely allergic to the fish in Dublin Bay where I used to sail. On one occasion I was out sailing and had a severe reaction where my face began to swell originating at my eye.

I was brought straight to the allergy specialist that had carried out my original tests. Under a microscope he found a fish scale in my eye that was causing the reaction. That put an end to my sailing in Dublin Bay. Next to go was my ability to swim there when I had a reaction following a swim with a friend.

I couldn’t put my shoes on because they were so swollen and ended up in hospital again on a nebuliser as they fought to reduce the swelling in my throat. I have also ended up in hospital in Sweden when studying there where I had a reaction after eating at a student event where there was a huge amount of fish available. Thankfully, my allergy seems to be confined to saltwater fish as I have never had a reaction swimming in freshwater.

I regularly speak to our different laboratory partners about the allergy testing available. They confirm that there is no reliable laboratory test available for food allergies or food intolerances. Despite this, there are a large number of these tests being sold online.

Personally, I have tried two food intolerance tests available online. Frighteningly, the two tests I did showed little or no intolerance to fish and also my results for other food types varied a large amount between the two tests. 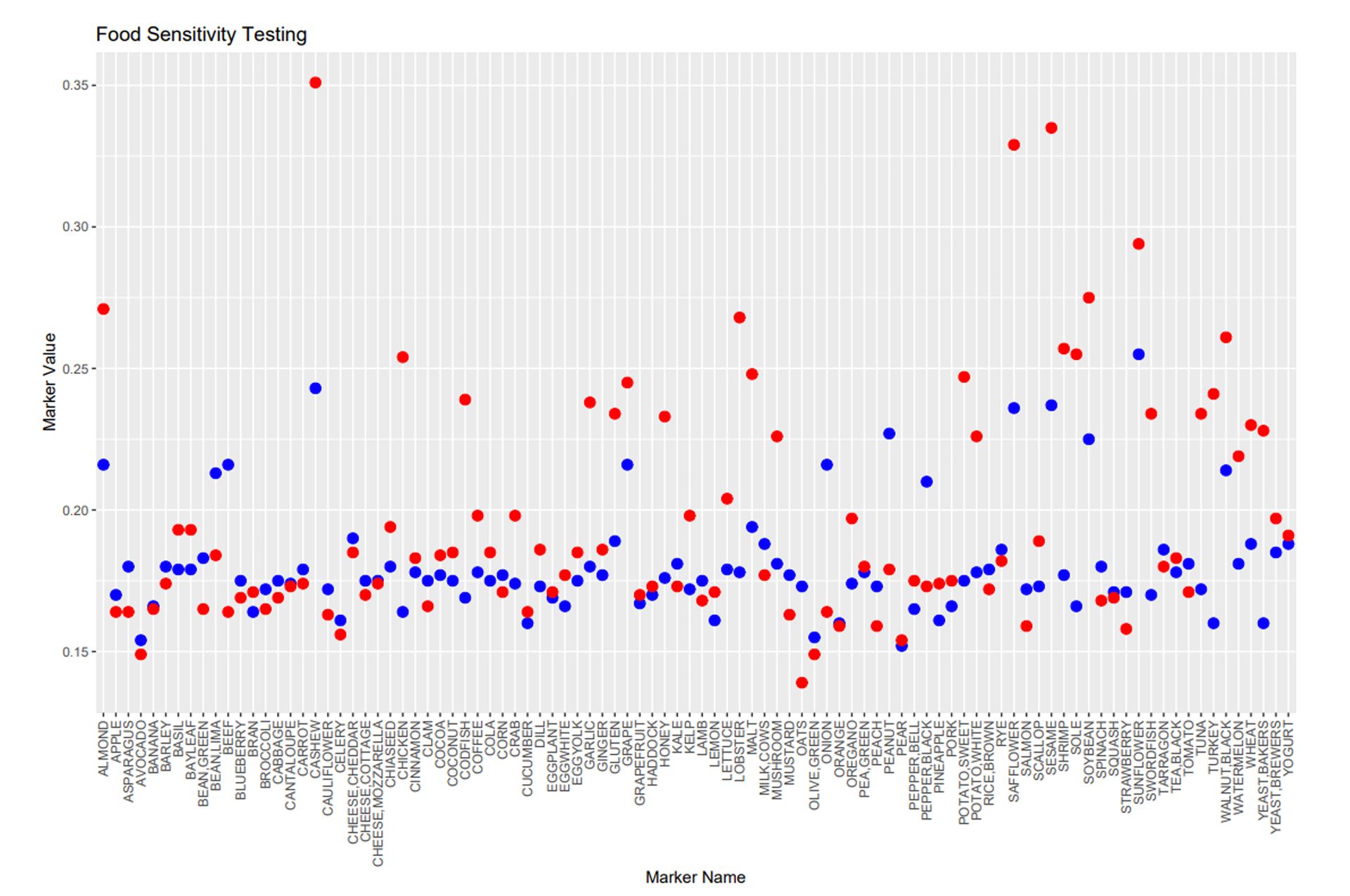 The blue dots on the graph represent my first online food allergy testing experience, while the red represent my second. The difference in these results are staggering.

Until there are food allergy and food intolerance tests that are reliable they shouldn’t be made available online.

There are going to be parents that provide these tests to their children and don’t identify severe allergies like the test I did. These parents will then be responsible for hospitalisation or even death of their own children after feeding them allergens that weren’t identified. Food intolerance tests often hide behind saying they are not food allergy tests and are not to be relied upon as such. If food intolerance tests aren’t as accurate as their inaccurate counterparts of food allergy tests, what is the point of them at all?

It is only a matter of time before companies in the US take the same action as companies like Boots who have banned these tests in the UK and Ireland as they are unreliable and frankly dangerous.

Regulation should not be the only driver of ethical behaviour and I hope that companies selling these tests online look past the money they are making and join us at LetsGetChecked in not selling them as they are inaccurate and unreliable.

At LetsGetChecked, we urge you to visit your doctor if you suspect that you might have a food allergy. Avoid self-diagnosing and or at home food allergy testing, it's a form of testing that we won't, endorse or provide until there are reliable tests available.