Why Does Smoking And Drinking Cause Cancer?

“Why does smoking and drinking cause cancer?” This is a common question that I get asked frequently in my clinic, and there is no straightforward answer.

It might seem like common knowledge that smoking tobacco and drinking alcohol is not good for your overall health but often the public don’t understand the specific mechanisms that may increase one’s risk of cancer.

In this article, I am going to strive to answer the complex question of why smoking and drinking cause cancer.

How Is Cancer Defined?

To start, let’s define cancer. Cancer occurs when a cell begins to divide itself in an uncontrolled fashion.

For healthy people, cell production occurs in a controlled way. During this process, certain cells in our bodies die off simultaneously while new ones form but for those who are living with cancer, they experience an uncontrolled growth of cancerous cells that multiply faster and more frequently than the body can handle.

Despite health awareness raising campaigns worldwide, there is still a staggeringly high number of people who continue to smoke cigarettes and drink alcohol to excess.

Often this group of people are younger, they’re living through a time in their lives when they think they are invincible, they're not thinking about the potential side effects of choices made now on their life later.

“People think “this won’t happen to me.” and that’s a dangerous way to think because you are ingesting more and more of the things you shouldn’t be and the impact is beginning to set root then, later in life it won’t be so manageable.

Why Does Smoking Cause Cancer?

Smoking causes cancer as a result of carcinogen-containing cigarettes that consistently weaken the immune system, damage cell production and lead to the overproduction of cancer causing cells.

Tobacco kills up to 50% of smokers, which amounts to 8 million people each year according to the most recent report by the World Health Organization.

No matter how you smoke it, tobacco is dangerous and affects the entire body. Cigarettes contain over 600 ingredients. When they burn, they generate more than 7,000 chemicals. Many of those chemicals are poisonous and at least 69 of them can cause cancer.

Smoking tobacco increases the speed of this process, and can make the growth of cancerous cells higher in volume.

Smoking tobacco is simply one of the worst things that you can do for your health and its impact on your cancer risk occurs in two different mechanisms.

Tobacco is cancer-causing because it has cancer-containing carcinogens.

Clean drinking water on the other hand will not cause cancer because it does not contain carcinogens.

If you look at any of the major cancers whether it be lung cancer, colon cancer, breast, bladder cancer, the rates are dramatically higher in smokers than non-smokers. What’s more, the difference in the severity of cancer between my smoking and non-smoking patients is undeniable.

I see cases of bladder cancer on a regular basis in my surgery.

The patient who is a smoker and has bladder cancer is likely to have a far more aggressive version of that cancer than the non-smoker with bladder cancer.

In my clinic, we also know that men who have prostate cancer and smoke are more likely to die from the disease than non-smokers.

So while we may not have the exact mechanics on what happens to our cells as we ingest tobacco smoke, we know that our patients who are smokers will have a more accelerated and aggressive rate of cancer than our patients who have never smoked.

Types Of Cancer Linked To Smoking

There are more than 100 different types of cancer.

As the carcinogens in cigarettes have the ability reach most parts of the body, they may cause a range of cancers including:

Lung cancer is by far the most common cancer caused by smoking. Smoking accounts for 80% of lung cancer cases.

For those who believe that smoking low tar cigarettes lowers their chances of living with cancer down they road, they are sadly mistaken. There is no lowered risk depending on the type of cigarette that you smoke.

What’s worse is that some smokers smoking low tar cigarettes generally smoke more as they believe that there is less harm being done per cigarette.

How Does Alcohol Use Cause Cancer? 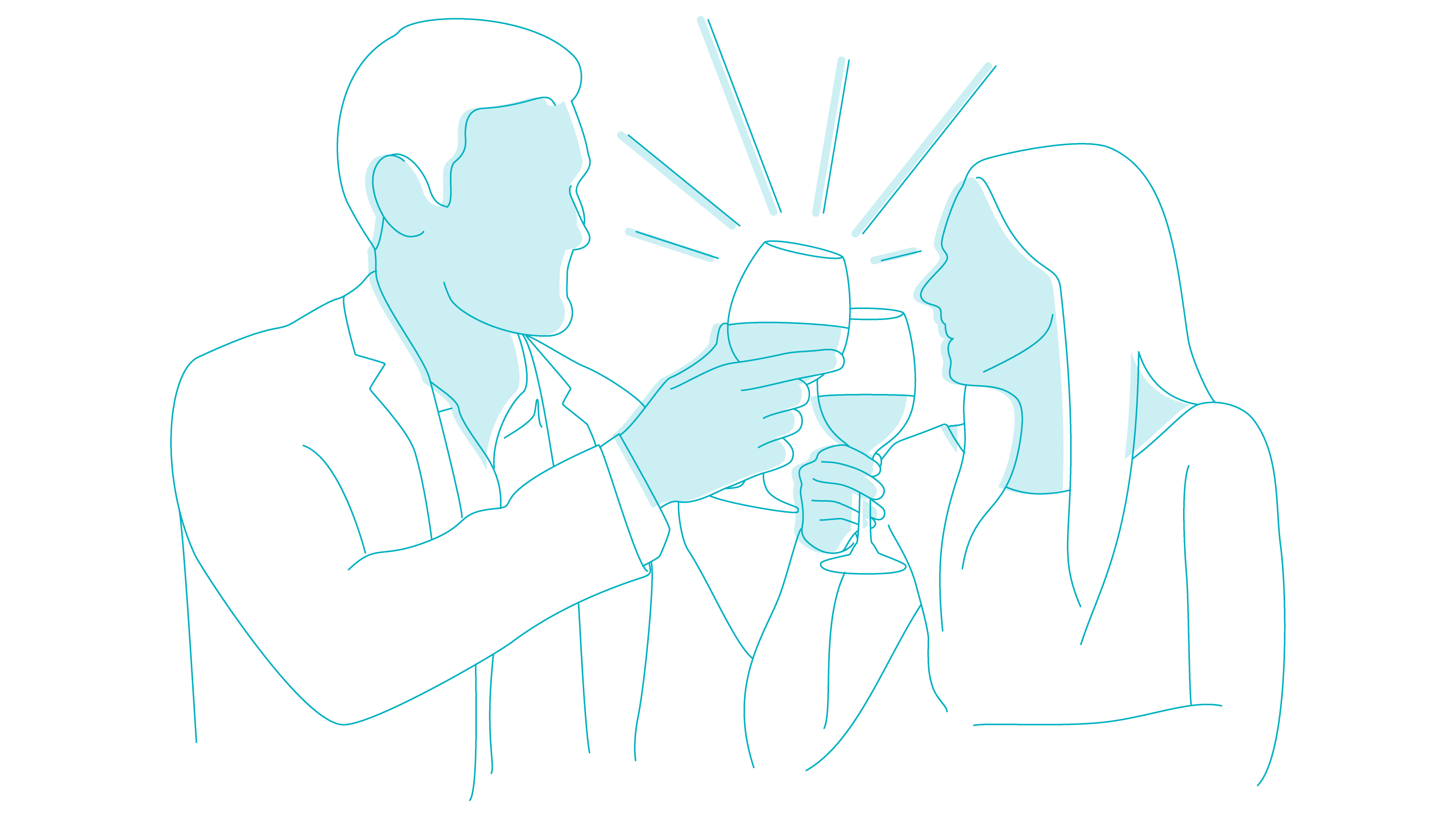 Alcohol consumption over a chronic period of time may cause cancer according to a number of reports. It is reported that 3.5% of cancer deaths in the U.S. are caused by the over-consumption of alcohol.

Most of the time when you see the bad outcomes that can arise with alcohol, or that can be linked back to alcohol, it’s going to be in people that go well beyond moderate consumption on a frequent and ongoing basis.

In answering the question “how does drinking cause cancer?”, we really need to look at the bigger picture of consequences that may arise from consuming alcohol.

Alcohol is easy to access and in today’s society, drinking to excess is often commonplace.

An alcoholic drink every now and then probably isn’t problematic but like everything in life, anything in excess is bad. The U.S. Department of Health and Human Service lists the consumption of alcohol as a known human carcinogen.

The excessive consumption of alcohol has most commonly been linked back to head and neck cancer, esophageal cancer, liver, breast and colorectal cancer. Alcohol ingestion over a chronic period of time may lead to central nervous system deficits and neurological issues such as dementia.

Researchers hypothesize that alcohol may cause cancer by:

Acting As A Damaging Irritant
Alcohol and its byproducts can act as an irritant, damaging organs such as the liver, mouth, throat, larynx, and oesophagus.

Changing The Structure Of DNA
Cells which are damaged by alcohol consumption will often try to regenerate themselves which may lead to DNA changes that are cancer-causing.

Damaging Cells
Oxidation is a process whereby cells become “chemically reactive”, this process of oxidation may lead to DNA, proteins and lipids being damaged.

Hinders The Absorption Of Vitamins & Minerals
The consumption of alcohol is said to hinder the body’s ability to absorb essential vitamins and minerals such as vitamin A, B, C, D and E as well as folate and carotenoids.

Causes Hormone Imbalance
The consumption of alcohol leads to increased levels of estrogen in the blood, a biological state which is linked to breast cancer.

Types Of Cancer Linked To Alcohol Use

According to the American Cancer Society, most common cancers that are regularly linked back to alcohol consumption include:

Alcohol Use And Smoking: A Greater Risk When Combined

Drinking alcohol and smoking together raises the risk of these cancers far more than the effects of either drinking or smoking alone.

There are numerous studies that show that there is a greater risk associated with drinking alcohol and smoking when they are combined.

There is definitely a worry around the addictive effects of both alcohol and nicotine. Alcohol has an addictive component to it. Some people are genetically wired to it. When they have their first drink, it feels like it’s the greatest thing that has ever happened to them.

The same goes for nicotine. Nicotine addiction is a real thing. It’s a physiological thing.

There are studies that illustrate that there is a higher likelihood of being a smoker if you are a regular drinker and vice versa, in fact, a recent report says that 85% of U.S. adults who are dependent on alcohol are also dependent on nicotine.

You’re smoking and drinking alcohol excessively at a time when you think you’re invincible, you’re in good health, your body is willing to overcome the negative impacts of smoking and it’s not now until later when you’re a little older and your body and the recovery isn’t quite so good.

This is because alcohol can act as a solvent, helping the harmful chemicals in tobacco to get inside the cells that line the digestive tract. Alcohol may also slow down these cells’ ability to repair damage to their DNA caused by chemicals in tobacco.

Smoking causes a multitude of health concerns harming nearly every organ of the body. This is why it’s better to give up smoking sooner rather than later, but even better yet, if you can avoid ever smoking, you will be making a truly positive impact on your health down the line.

While there are no safe alcohol limits, the more you drink, the greater the risk of cancer. However, you can enjoy a healthy lifestyle if alcohol is enjoyed responsibly and in moderation.

Cutting down on both drinking and smoking will not only be a health benefit; you will end up with more money in the bank and will wake up feeling physically and mentally strong every single morning.

Making healthy choices when you’re younger sets you up for a happier and healthier life as you get older.

If you want to learn more about our cancer screening options, you can contact us directly by live chat to speak to our medical team.